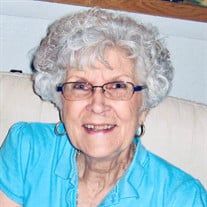 Wanda Louise Johns passed from this life to life everlasting in the early morning Saturday June 29, 2019 at the home of her grandson Darian Johns and his wife Samantha Johns. She was 87. Wanda Louise Spurgeon was born on January 21, 1932 in Liberty Morris, OK to Sam Wiley and Josie Ellen Spurgeon. She was the eldest of three girls, and is survived by her two sisters Donna Kennedy of Big Spring, TX and Betty Hale of Jenks, OK. She was close to her sisters, and their bonds remained strong as they became adults and had families of their own. The girls attended Liberty Morris Schools where she played 6-on-6 basketball, and her nickname was “Slim”. Wanda repeated the second grade at the request of her father because he wanted her to get a better education than he received (which was only up to the second grade). After graduating from high school she attended Oklahoma A&M, now known as Oklahoma State University where she had a near death experience in swimming class. Wanda married Henry Johns, Jr. on January 20, 1953. They were married on this date so that they would be the same age (per Wanda’s request). They moved to Fort Leonard Wood, MO because Henry was stationed there in the Army. He was deployed to Korea from 1953 to 1955, and during that time Wanda resided there working at a local pharmacy. Once Henry returned from Korea they made their first home at Windy Acres Farm in Oktaha, OK. They welcomed their eldest son Michael Henry Johns into their home in August of 1962 followed by their daughter Sammie Renee (Johns) Tanner in August of 1965. The family lived at Windy Acres Farm until 1968 when Henry accepted a position as a probation and parole officer in Okmulgee, OK. They relocated their home to Morris, OK where they would spend the next 51 years of their marriage. Following the move, Wanda began working at Morris Public Schools from 1970 to 1980. Initially her role was the “media specialist”, also known as the official copy maker. She then served as the executive secretary to the principal. She made the decision to run for office as the Okmulgee County Court Clerk in the summer of 1980. She was elected and took office in January of 1981 and she served in this role until her retirement in 1992. Wanda was an active member of Morris First Baptist Church where she taught Sunday school for many years. Wanda is survived by husband Henry Johns of Morris, OK, son Mike Johns of Morris, OK & daughter Renee Tanner (husband Chris) of Nowata, OK; her seven grandchildren Kyle Tanner-Mennenga, Shelbi Swyden, Chesney Stough, Darian Johns, Ariana Parrott, Tori Tanner and Tia Tanner and five great grandchildren Jaden Wyrick, Talon Wyrick, Lucien Tanner-Mennenga and Adalynn Parrott. She loved spending time with grandchildren, reading, traveling with her family (especially Ruidoso, NM). She enjoyed playing board games, going to the beauty shop and doing the daily crossword puzzle in the Tulsa World. Wanda always had a bit of a flare for fashion, she enjoyed shopping and always looked her best no matter where she went. She was a beloved wife, mother, grandmother, great grandmother and friend. She will be greatly missed by all who knew her. A funeral service for Wanda will be held 10:00 am. Wednesday, July 3, 2019 at the First Baptist Church of Morris with Brother Dave Kelley officiating. Interment will follow at the Morris Cemetery. In lieu of flowers the family ask that donations be made to the Alzheimer's Foundation of America: http://alzfdn.org/support-us/donate/ Arrangements have been entrusted to the McClendon-Winters Funeral Home of Okmulgee.

Wanda Louise Johns passed from this life to life everlasting in the early morning Saturday June 29, 2019 at the home of her grandson Darian Johns and his wife Samantha Johns. She was 87. Wanda Louise Spurgeon was born on January 21, 1932 in... View Obituary & Service Information

The family of Wanda Johns created this Life Tributes page to make it easy to share your memories.

Wanda Louise Johns passed from this life to life everlasting...