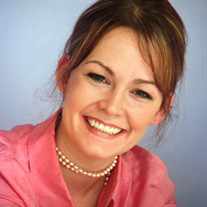 Lauren Elizabeth Hess was born Wednesday, March 26, 1980 in Oklahoma City, Okla to Debbie (Dixon) and Randy Hess. She left us far too soon on Sunday, September 6, 2020 at her home in Tulsa from complications of juvenile (Type 1) diabetes. Lauren was raised in Okmulgee, Okla and graduated from Okmulgee High School, class of 1998. She attended the University of Oklahoma where she pledged Pi Beta Phi and graduated with a B.A. in Liberal Studies. Lauren was a force. She captivated and commanded a room with her contagious smile, roaring laughter and animated stories. She was smart and quick witted. She excelled in sports, going to State in both tennis and golf, and was thrilled when she made her hole in one. She was a skilled gardener and found purpose in arranging flowers and landscape design. Lauren was creative and brought joy to others through planning and hosting parties and events. She loved being surrounded by family and friends, decorating for the holidays, the lake, traveling, her time in Boston, singing and dancing, and a good book. She was fiercely protective of her family, even giving herself the title of “bodyguard” to her younger sister and nephews. Lauren was a loyal friend, putting everyone above herself until her last day. Lauren was preceded in death by her maternal grandparents, Joan and Bill Dixon, paternal grandparents, Louise and Bob Hess, and her beloved yorkies, Stella and Bentley Hess. She leaves behind her parents, Debbie and Randy Hess, sister Joan (Hess) Anderson and husband Cody, nephews Hess and Henry Anderson; aunts and uncles, Holly (Hess) and Don Martin, Cindy Hess and Frank Duncan, Margaret and Rob Hess, Lou Anne Hess, Kathy and Rick Hess and Mike Dixon; cousins, Emily (Martin) and Jason Bussey and their children, Marielle, Vivian, Corrine and Lucia, Nonya and John Martin and their children, Andrew and Anna, Mariena and Scott Martin, Jackson Hess, Alex Hess, Mark Hess, Robert Walters, Austin Walters, Tyler Walters, Jordan Hess, Blake Hess and Aaron Dixon; and countless friends, classmates and loved ones from near and far – whose lives are all better for having known her. A family service is scheduled for Sunday, September 13. A celebration of her spirited life and generous heart will be held at a later date. Although Lauren had a great love of flowers and plants, the family asks that in lieu of flowers, donations be made in her honor to the Juvenile Diabetes Research Foundation. Arrangements and cremation services have been entrusted to the McClendon-Winters Funeral Home of Okmulgee. Memories, condolences, photos and videos may be shared with the family on Lauren’s Tribute Page of our website at www.mcclendon-winters.com

Lauren Elizabeth Hess was born Wednesday, March 26, 1980 in Oklahoma City, Okla to Debbie (Dixon) and Randy Hess. She left us far too soon on Sunday, September 6, 2020 at her home in Tulsa from complications of juvenile (Type 1) diabetes. Lauren... View Obituary & Service Information

The family of Lauren Hess created this Life Tributes page to make it easy to share your memories.