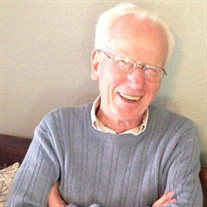 Francis (Frank) L. Lewis, Ed.D., age 97, of Oklahoma City, Oklahoma, passed away peacefully on Wednesday, May 18, 2022. Frank was born in Okmulgee, Oklahoma on October 30, 1924. He is preceded in death by his parents, the late Charles Doris Lewis and Eula Cole Lewis, and his wife of 60 years, Beverly Johnson Lewis, his brothers Charles (Chuck) Lewis and Wilbur Lewis, and his sister Rose Elaine Livingston.  He is survived by his children, Rebecca Lewis, Lisa Lewis Jones (Mark), Anna Lewis Rogers (John), and Peter Lewis (Becky), eight grandsons, Elisha Gentle, Ezra Gentle (Amanda), Ezekiel Gentle, Jeremiah Gentle, Chris Rogers, William Rogers, Deacon Lewis, and Cooper Lewis, and one great grandson, Judah Gentle. Frank grew up in Okmulgee, Oklahoma. He graduated from Okmulgee High School in 1943. In that same year, as World War II raged, he enlisted in the Military. He attended Midshipman training at Notre Dame and Officer Training school in the V-12 program at Milligan College, Tennessee. He served in the Navy as a Commissioned Officer in the Pacific Theater, on the LST 1120, until the conclusion of World War II. After his discharge from active service in June 1946, he served in the Navy Reserves. Impacted by his time in the Navy, he remained in contact with many of his Navy buddies, attending ship reunions well into his 70s. He attended Oklahoma Baptist University (OBU) where he received his bachelor’s degree. Following his graduation from OBU, he attended Southwestern Baptist Theological Seminary in Ft. Worth, Texas where he received a master’s degree in religious education. In 1972, he returned to Southwestern Baptist Theological Seminary this time receiving a Doctorate in Education. In 1949, Frank began his career in ministry career as Minister of Music and Youth at Calvary Baptist Church, Dennison, Texas where he served for 10 months before accepting a call to serve as Minister of Music and Education at Central Baptist Church, Lawton, Oklahoma. In December 1956 he was called to serve as Pastor of University Baptist Church, Oakland, California where he served until April 1959, at which point he was appointed by the International Mission Board, together with his wife, to serve as missionaries to Indonesia. In his long career he wore many hats. The positions he held the longest during his 30-year tenure in Indonesia, which were most dear to his heart, were with the Baptist Theological Seminary in Semarang, Java, Indonesia. Frank served in various roles, as a Professor, Rector, Minister of all things music, leading vocal choirs, and handbell choirs, directing dramas, and mentoring young ministers to serve across Indonesia. He loved the students that he worked with, staying connected with many through the years. He was described as “truly loved by the Indonesian people and faithfully gave himself to serve them in the name of Christ.” He was always a man of grace and kindness, humble yet tenacious about his faith, admired and respected. It was his great joy, after his retirement from the International Mission Board, to join the staff of First Baptist Church (FBC) Okmulgee, his childhood church, where he served for several years before his second retirement. He loved music and enjoyed being part of the choir at FBC for years beyond his “second retirement.” Frank had an easy smile and a wonderful laugh. He was quick witted and knew how to create a pun with the best. He was a steadfast presence in the lives of his family and will be greatly missed. Viewing will be held on Friday, June 3, 2022, from 12-6PM at McClendon-Winters Funeral Home, Okmulgee, Oklahoma. A celebration of Frank’s life will be held the following day, Saturday, June 4th at 11AM at First Baptist Church Okmulgee, Oklahoma. Interment will follow in the Okmulgee Cemetery. Arrangements have been entrusted to the McClendon-Winters Funeral Home of Okmulgee. Memories, condolences, photos and videos may be shared with the family on Frank’s Tribute Page of our website at www.mcclendon-winters.com

Francis (Frank) L. Lewis, Ed.D., age 97, of Oklahoma City, Oklahoma, passed away peacefully on Wednesday, May 18, 2022. Frank was born in Okmulgee, Oklahoma on October 30, 1924. He is preceded in death by his parents, the late Charles Doris... View Obituary & Service Information

The family of Frank L. Lewis created this Life Tributes page to make it easy to share your memories.