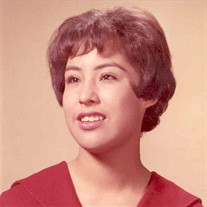 Winona Frances Simms of Norman passed away Tuesday, February 21, 2017. She was born in Albuquerque, New Mexico on October 20, 1947 to the late Yahola Simms and Beulah King. She is a Creek and Euchee member of Muscogee Creek Nation. She graduated from Okmulgee High School in 1965 and in 1975 she earned a bachelor's degree in English and Voice from Oklahoma University. Winona attended the University of Oklahoma in the College of Law before transferring and earning a master's of Education in Community Counseling in 1986. Finally, in 1994, she earned a doctorate in Applied Behavioral Studies from Oklahoma State University. Winona worked extensively with multicultural; students and was an advocate for students. "Much of that involved helping students reach their potential without changing who they are." She saw "that having a bicultural perspective is not a limitation, it's an advantage." She saw that it should be "regarded as a source of strength. If you know what your values are, you don't have to struggle with decisions." She is preceded in death by her parents, older sister Sharon Clark and her younger sister Kay Freeland. Left to cherish the wonderful memories of Winona is her daughter Kimberley C. Oldham of Kennewick, Washington, sons Allen C. Hensley of Norman, Oklahoma, and Taylor S. Shilling of Stillwater, Oklahoma, three grandchildren Brennon T. Hensley of Hollis, Oklahoma, CreCre S. Oldham of Kennewick, Washington, and Mahiya N. Shilling of Stillwater, Oklahoma, sisters Peggy S. Rains of Slaughterville, Oklahoma, and Yolanda Otero of Weleetka, Oklahoma, and one brother Yahola Simms of California. Funeral service will be held 1:00 P.M. Monday, February 27, 2017 at the Tallahassee Church. Interment will follow at the Tallahassee cemetery. A wake service will be7:00 P.M. Sunday, February 26, 2017 Tallahassee Church. Arrangements have been entrusted to the McClendon-Winters Funeral Home of Okmulgee. Memories, condolences, photos and videos may be shared with the family on Winona’s Tribute Page of our website at www.mcclendon-winters.com

Winona Frances Simms of Norman passed away Tuesday, February 21, 2017. She was born in Albuquerque, New Mexico on October 20, 1947 to the late Yahola Simms and Beulah King. She is a Creek and Euchee member of Muscogee Creek Nation. She graduated... View Obituary & Service Information

The family of Winona Frances Simms created this Life Tributes page to make it easy to share your memories.