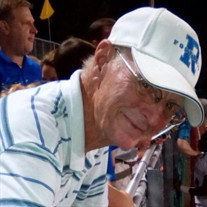 William Dale "Bill" Dixon, 84, passed away November 23, 2019 at the home of his daughter, Helen, in Morris, Ok surrounded by his loving family. Funeral service will be held Sunday, December 1st at 2pm at Jamesport United Methodist Church. Interment will follow in Jamesport Masonic Cemetery. There will be a family visitation at the Roberson Funeral Home in Jamesport, Missouri, 503 S. Broadway from 4:00 P.M.-6:00 P.M. Saturday, November 30. Billy Dale was born June 26, 1935 to Leland Dale and Helen (Bohannon) Dixon in Jamesport. Bill's parents passed away in 1940 and 1941 when Bill was 5 years old, leaving him and his sister, Peggy, to be raised by their grandparents; Everett and Monta (Whorton) Dixon, spending every summer on the farm near Jamesport, and Mack and Cora (Thompson) Bohannon in Muskogee, Oklahoma. He attended school in Muskogee, graduating from Muskogee Central High School in 1953. Bill loved farming, and he joined his grandfather on his farm east of Jamesport where he lived until his illness. On August 12, 1956 he married Joyce Naber in Jamesport. She preceded him in death on March 29, 2002. BIll worked for the Rock Island Railroad for about ten years. He then worked as a rural mail carrier in Jamesport until he retired. Throughout his adult life he continued farming, in recent years partnering with Richard Dustman. He was a member of Trenton Masonic Lodge, Moila Shrine Temple, Jamesport Lions Club, National Rural Letter Carriers Association, and Brotherhood of Railroad Trainmen. He was a Chiefs' fan from the very beginning, loved the Royals, and Mizzou Football. In his retirement he enjoyed traveling with his longtime companion, Neva Fiedler. They travelled to Hawaii, Alaska, Cancun, took Caribbean cruises, and spent the last several winters in Gulf Shores, Alabama. Bill is survived by his three children, Cheryl McKenzie (Durwin Fitch) of Kapolei, Hi, Charles Dixon of Gladstone, Mo, Helen (Mike) Chastain of Morris, Ok, sister Peggy Dixon Starkey of Muskogee, Ok, grandchildren, Eric McKenzie, Emily McKenzie, John Dixon, Jimmy Dixon, and Meghan (Shawn) Stopp, great grandchildren Hailey McKenzie, Lily McKenzie, and Jaxton Stopp and Neva Fiedler of La Plata, Mo and her family. Memorials may be made to Gee's Creek Cemetery or Jamesport United Methodist Church in care of McClendon-Winters Funeral Home, 303 E 7th St, Okmulgee, OK 74447. Online condolences may be left at mcclendon-winters.com

The family of William "Bill" Dixon created this Life Tributes page to make it easy to share your memories.