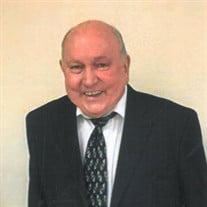 William Vernon Bearden, Sr., (Bill) of Morris passed away due to natural causes on Sunday, November 29, 2020 at the age of 87 in Fort Smith, Arkansas. He had been fighting a knee infection after two knee surgeries. Bill was born on November 25, 1933 in Binger, Oklahoma to Arthur Bearden and Ora Elliot Bearden. He graduated from Binger High School and earned a Bachelors Degree from Oklahoma State University in Vocational Education. Bill had aspirations of playing college and professional baseball, however, a foul ball to his right hand (dominant) index finger put an end to that. He didn't let that derail his love for baseball, as he helped in the recruitment of Johnny Bench, also from Binger, who went on to become a Hall of Fame catcher for the Cincinnati Reds. Bill also served as a talent scout for the Baltimore Orioles. Practically every summer the Bearden family would drive to St. Louis to watch a three of four game series between Bill's beloved Reds and the St. Louis Cardinals, with courtesy tickets from Bench, of course. Bill lived a very busy and full life. He was always 'on the go'. He possessed an energizing smile and hilarious laugh that would put a smile on everyone's face. He taught vocational education (Vo-Ag / FFA) at Morris High School and Okmulgee High School for over 35 years. At Morris, he coached several years as the girls and boy’s basketball coach, winning a State Championship with the girls. He loved working with his students (who called him Mr. B) and helping them raise their show animals, including pigs, sheep, and cattle. Bill always made arrangements for his students to attend the various live stock shows, including the Morris Livestock Show, the Okmulgee County Fair in Okmulgee, the Okmulgee County Spring show in Beggs, the Muskogee State Fair, the Tulsa State Fair, and the Kansas City Royal in Kansas City. His students were always active in selling Blue and Gold Sausage and Christmas fruit (oranges, apples, and grapefruit). Bill also had a clear, pristine voice which he displayed on KOKL radio for Okmulgee Bulldog sports and as the public address announcer for the Okmulgee Bulldogs, Morris Eagles, and at the county basketball tournaments. During the summer months when school was out of session, starting in the very early 1970's, he owned and operated a retail and wholesale fireworks business which was still in operation when he passed away. He was a member of the Okmulgee Masonic Lodge #199 AF & AM for 61 years. He was also a member of Town and Country Christian Church in Okmulgee. Bill married his lifelong sweetheart, Lila Rogers on June 5, 1954. Four children were born from their happy, 62 year marriage. Bill Bearden Jr. of Morris, Carol King and husband Todd of Bixby, Gracie Bearden of Tulsa, Stan Bearden and wife Sharon of Broken Arrow. He is survived by all four children. Other survivors include ten grandchildren, Lori and Raymond Moore, Jennifer and Jeremy Avery, Johnathan and Loubna, Michelle Giddens, Afton and Patrick McManus, Clint and Lisa Tolbert and Keith Tolbert, Nicholas and Nathan Bearden, Emily Cervini and Lisa Tolbert, and twelve great grandchildren including Mia and Max Moore, Jaxen Cole, Lillie and Sutton Giddens, Jake and Jessa Avery, Luke and Hendrix Tolbert, Emma and Allie Morris, Maddox Tolbert, Cruz Tolbert and Maryem Morris. Bill was preceded in death by his parents Arthur and Ora Bearden, wife Lila Bearden and sister Mary Drake. They shall not grow old, as we that are left grow old. Age shall not weary them nor the years condemn. At the going down of the sun and in the morning, we will remember them. 23 centuries ago, so Plutarch tells us an old Spartan King observed ~ It is not the places that grace men, but men grace places. In a world awash with change, something’s stand firm. Somethings are as Plato said,”Good~True~ and Beautiful~ If you have ever known such greatness, it is hard to be content with their silence, for we miss them. The empty chair on a holiday, empty everyday, the photograph that goes wherever you do. The picture fades, but the person in it does not. Their spirit lives on and no words ease your pain. People do grace places, but people also grace people. We are blessed by our time with those now asleep. The mighty and the gentle, so sleep sweet precious father in honored rest, for the loving are the daring. Friends may visit he funeral home for a Time of Remembrance on Thursday, December 10, 2020 from 10:00 A.M. – 8:00 P.M. A private committal service for immediate family will be held. Arrangements have been entrusted to the McClendon-Winters Funeral Home of Okmulgee. Memories, condolences, photos and videos may be shared with the family on Bill‘s Tribute Page of our website at www.mcclendon-winters.com

William Vernon Bearden, Sr., (Bill) of Morris passed away due to natural causes on Sunday, November 29, 2020 at the age of 87 in Fort Smith, Arkansas. He had been fighting a knee infection after two knee surgeries. Bill was born on November... View Obituary & Service Information

The family of William Vernon Bearden Sr. created this Life Tributes page to make it easy to share your memories.

William Vernon Bearden, Sr., (Bill) of Morris passed away due...