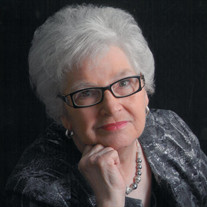 Weeta Joycelyn Tucker, 80 year old resident of Okmulgee, passed away Monday, March 6, 2017 in Okmulgee. She was born April 23, 1936 in Paoli, Oklahoma to the late James Claude and Mary Florence (Keener) Whitaker. She married Clyde J. Tucker on July 3, 1953 in Purcell, Oklahoma. He preceded her in death on November 7, 2011. Weeta was a Charter Member of the Trinity Baptist Church in Morris, co-founder of AGAPE Pregnancy Center and was a member of the Baptist Village Bell Choir. She was also a Red Hatter and formerly active in the Okmulgee Chamber of Commerce. Weeta was a longtime Okmulgee area real estate agent. She cherished the time she spent with her family. Weeta was preceded in death by her parents, husband and eleven siblings. Survivors include three sons, Mark Tucker and wife Lori of Okmulgee, Rick Tucker and wife Sherrie of Wayne and David Tucker and wife Debbie of Davis, a brother, Stanley Whitaker of Baytown, Texas, sister, Betty Shanahan, five grandchildren, seventeen great grandchildren and numerous nieces and nephews. A funeral service will be held 2:00 P.M. Wednesday, March 8, 2017 at the Trinity Baptist Church with Reverend Scott Wolf officiating. A private family interment will follow. Casket bearers will be Brian Tucker, Steven Tucker, Nathan Gassen, Robert Doughty, Danny Lesley and Troy Caudle. Memorial contributions may be made to the AGAPE Pregnancy Center in Weeta’s memory. Arrangements have been entrusted to the McClendon-Winters Funeral Home of Okmulgee. Memories, condolences, photos and videos may be shared with the family on Weeta’s Tribute Page of our website at www.mcclendon-winters.com

The family of Weeta J. Tucker created this Life Tributes page to make it easy to share your memories.