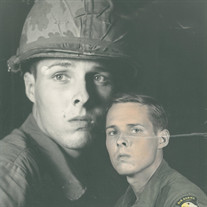 Wayne Lee Burton passed away Saturday, April 11, 2020 in Muskogee at 71 years of age. Wayne was born July 9, 1948 in Kermit, Texas to the late Phillard Lee and Mary Edith (Kepler) Burton. He married Ruby Marie Engle on December 1, 1966 in Sayre, Oklahoma. Wayne proudly served his country in the United States Army. They moved to Pawhuska in 1984 and later moved to Okmulgee in 1997. He retired from Pump and Motor Works in Okmulgee. Wayne was a 32 Degree Mason and was an active member of the Okmulgee Masonic Lodge #199 AF & AM and a member of the Okmulgee County Shrine Club. He enjoyed watching his birds and spending time with his grandkids. Survivors include a daughter, Kimberly Burton-Carrier and husband Allan, son, Steven Burton, grandsons Chris Burton and Garrett Carrier, great grandchildren, Serenity Burton, Keagan Burton and Brantley Burton., a brother, David Burton and wife Cindy, a sister, Carol McIntire and husband John and numerous nieces and nephews. Masonic Rites will be conducted at 10:00 A.M. Tuesday, April 14, 2020 and can be viewed by webcast at www.mcclendon-winters.com/obituaries/Wayne-Burton/ Friends may visit the funeral home for viewing on Thursday from 9:00 A.M. – 8:00 P.M. A private family graveside service will be held at the Pawhuska City Cemetery. Casketbearers will be Steven Burton, Chris Burton, Garrett Carrier, Allan Carrier, David Burton, John McIntire and Justin McIntire. Arrangements have been entrusted to the McClendon-Winters Funeral Home of Okmulgee. Memories, condolences, photos and videos may be shared with the family on Wayne 's Tribute Page of our website at www.mcclendon-winters.com

The family of Wayne Lee Burton created this Life Tributes page to make it easy to share your memories.