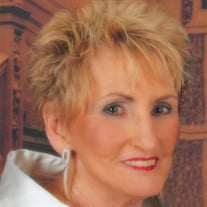 Wanda Sue Weatherford was born July 11, 1933 in Poteau, Oklahoma to the late Cecil and Edna (Pickle) Bright. Sue passed away at the age of 86 on Tuesday, November 5, 2019 in Tulsa. Sue was raised in Poteau and graduated from Poteau High School in 1951. She married Joe Dean Weatherford on December 5, 1952. They soon moved to Kansas City where Joe attended Kansas City College of Mortuary Science and Sue worked for TWA Airlines as a Switch Board Operator. Beginning in 1955, Sue and Joe owned and operated funeral homes in Hinton, Fairview, and Lawton. In 1971, they moved to Miami and purchased the Cooper Funeral Home of Miami and Fairland. They were also co-owners of McClendon-Winters Funeral Home in Okmulgee, Morris and Beggs for many years. Sue and Joe made their home in Miami until 1991, when they moved to Hot Springs, Arkansas and purchased the Hot Springs Funeral Home. In 1993 they returned to Miami, where they lived until Joe passed away in 2013. Sue then relocated to Tulsa to live at Inverness Village. Sue was a gracious hostess and enjoyed entertaining family and friends at her home. She loved traveling the world and could recount every detail of their many adventures. She cherished the memories made while in Mexico and enjoyed trips to Las Vegas and the occasional horserace. Sue was famous for her Egg Nog and Apple Pie and she loved Christmas time. She had also been known to give cooking lessons to Joe’s friends. Sue was a member of the First United Methodist Church in Miami, PEO Chapter EJ, Friday Study Club. Sue remained an active supporter of numerous organizations supporting the community and Miami Public Schools. Sue will be remembered for her generosity and love for giving to others. Sue is survived by her daughters, Sherrie Hulse and husband Mike of Tulsa, and Shelly Weatherford of Overland Park, Kansas, a son, Jason Winters and wife Nicole of Okmulgee, a brother, Harrell Bright of Tulsa, grandchildren, Megan Harlan and husband Justin of Tulsa and Matthew Hulse and wife Paige of Tulsa, great grandchildren, Landon and Payton, grandchildren, Braden Winters of Stillwater and Merrick Winters of Okmulgee, and niece and nephew, Jeff Bright of Tulsa and Susan Weatherford of Oklahoma City. The family will receive friends from 5:00 P.M. – 7:00 P.M. on Thursday evening at the Cooper Memorial Chapel of the Brown-Winters Funeral Home in Miami. A reception to celebrate Sue’s life will be held 4:00 P.M. – 6:00 P.M., Friday, November 8, 2019 at the Oaks Country Club in Tulsa. A private committal service will be held at Calvary Cemetery in Tulsa with Father Noel Doherty officiating. Casket bearers will be Matt Hulse, Mike Hulse, Jason Winters, Justin Harlan, Braden Winters and Merrick Winters. Memorial contributions may be made to the Joe D. Weatherford Memorial Endowed Scholarship in Funeral Service, c/o The University of Central Oklahoma Foundation, 100 N. University Drive, Edmond, Oklahoma 73034 or in care of the funeral home. Memories, condolences, photos and videos may be shared with the family on Sue’s Tribute Page of our website at www.mcclendon-winters.com

Wanda Sue Weatherford was born July 11, 1933 in Poteau, Oklahoma to the late Cecil and Edna (Pickle) Bright. Sue passed away at the age of 86 on Tuesday, November 5, 2019 in Tulsa. Sue was raised in Poteau and graduated from Poteau High School... View Obituary & Service Information

The family of Wanda Sue Weatherford created this Life Tributes page to make it easy to share your memories.