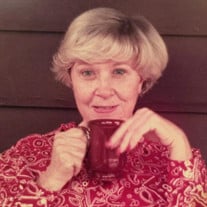 Viva Rhea Whomble went to her heavenly home on October 5, 2019. She was born on September 7, 1923 in Hitchita, Oklahoma to Leslie and Lenora Townsend. She graduated from Haskell High School. She married Harold Clifford (Bus) Whomble on May 10, 1941 in Checotah, Oklahoma. They established a home in Okmulgee and raised two children where Bus was employed by Phillips 66. After his death in 1966, she moved to Muskogee where she owned several businesses, Queen Shop and Viva’s. In the late 1970s, she moved to the Pryor and Locust Grove area. She established as business owner in Pryor with a women’s boutique named Town & Country and a tearoom named Three Sisters Tea Room. After retiring, she lived her remaining years in Pryor. She was a member of the Episcopal Church. She was an avid reader, loved cooking, and avid sports fan especially basketball. She is survived by her daughter, Sue Burchfield of Houston, Texas; her daughter-in-law, Cheryl Whomble of Okmulgee; two grandsons, Dirk Moore of Houston, Texas, and Shawn Moore and wife Dana of Okmulgee; two granddaughters, Shannon Whomble Williams and husband Mark of Tulsa and Ashlee Elersic and husband Jason of Houston, Texas; sister Shirley Cole of Brookville, Kansas; five great-grandchildren, one great-great grandchild; and numerous nieces and nephews. She is preceded in death by her husband Bus Whomble, son Doug Whomble, parents Leslie and Lenora Townsend, sisters Naomi Thomason and Jean Stewart, and brother Loy Townsend. The family will be present for a viewing on Friday, October 11th from 11:00 am – 1:00 pm at McClendon-Winters Funeral Home at 303 East 7th Street, Okmulgee, OK 74447. A graveside service will follow at the Okmulgee Cemetery at 2:00 pm. Arrangements and cremation services have been entrusted to the McClendon-Winters Funeral Home of Okmulgee. Memories, condolences, photos and videos may be shared with the family on Viva's Tribute Page of our website at www.mcclendon-winters.com

Viva Rhea Whomble went to her heavenly home on October 5, 2019. She was born on September 7, 1923 in Hitchita, Oklahoma to Leslie and Lenora Townsend. She graduated from Haskell High School. She married Harold Clifford (Bus) Whomble... View Obituary & Service Information

The family of Viva Whomble Edwards created this Life Tributes page to make it easy to share your memories.