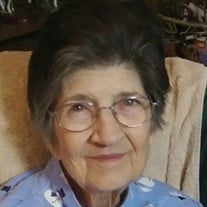 Virginia "Ginny" Claborn, 80, of Okmulgee passed away peacefully on Thursday afternoon, June 27, 2019. Ginny was born on June 29, 1938 in Henryetta, OK to Willie Robert "Bill Goodman" and Jessie Crawford. She graduated from Henryetta High School. Ginny worked at Wackers, Trophies Unlimited, and Laub Sheet and Metal, as well as ran Claborn T-Shirt Shop. Ginny married Johnny "Gene" Claborn Sr. on December 28, 1956, and they were happily married for almost 57 years.  Ginny and Gene had two sons, John and Larry.  Ginny's number one priority was her family, and she was the perfect hostess.  She enjoyed fishing, camping, bingo, the OU Sooners, picnics, animals, gardening, and "making memories" with family. Ginny is survived by her two sons, Johnny, "John" Claborn, Jr. and wife, Linda, of Winchester, and Larry Claborn and wife, Tiffany, of Okmulgee.  She is survived by her brother, David Goodman, and wife, Ann, of Moore, OK.  She is also survived by two grandsons, Stephen Claborn of Sapulpa, and Christopher Claborn and wife, Krystal, of Fort Collins, CO.  Ginny was a proud aunt and great-aunt to a host of nieces and nephews.  She was preceded in death by her husband, Gene, parents, Bill and Jessie Goodman, and brothers Bill and Richard.  She will be missed by family and friends. The visitation was held from noon until 8 pm at McClendon-Winters Funeral Home in Okmulgee on Monday, July 1st.  The graveside funeral service was held at 10 am on Tuesday, July 2nd, at Westlawn Cemetery in Henryetta.

The family of Virginia Claborn created this Life Tributes page to make it easy to share your memories.