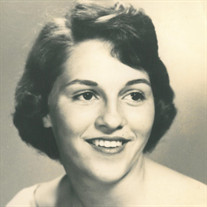 Veta Fay ‘Southern’ Repsher, a resident of Okmulgee passed from this life on December 7, 2019 at the age of 77. She was born to Raymond "Bunny" Southern and Ruby (Williams) Southern on September 19, 1942 in Fresno, California. She attended Liberty Morris School and Wilson School for a short period of time before marrying James Lyle McCall on November 8, 1958. The two were married for twenty-one years and had three children. She then married Robert "Bob" Repsher on December 30, 1982. Veta worked at George Nigh Rehabilitation Center in Okmulgee for almost twenty-three years before she retired September 29, 2000. Veta was a widowed member of the Okmulgee Elks Lodge. She enjoyed reading and fishing, but most of all her pride and joy was her family and grandchildren. Veta was preceded in death by her parents, Ricky and Bunny Southern of Wilson and Ruby Williams of Bakersfield, CA., husband, Robert "Bob" Repsher of Okmulgee, son Tim McCall of Okmulgee, grandson Justin McCall of Nebraska City, NE., sister, Donna Gunter of Shawnee, brother, Garland Southern of Wilson. Those left to cherish the wonderful memories of Veta are her sons, Darrel McCall and wife Pam and Roger McCall and wife Lanita, daughter-in-law Angelia McCall, all of Okmulgee, grandchildren, Josh McCall and wife Julie, Jake McCall and wife Lindsey, Tonya, Dallas, and Dalton McCall and Shande Spidell, great-grandchildren, Brendan, Jacey, Kadynce, Emberlyn, Chase, Alexis, Allie, Pippa, Timmy, Aden, Daxton, and Carter McCall, Izayah, Mycah, Kyerrah, Marquese, and Damaurri Watson, and MaeKenlee Spidell, sisters, Vicky Mosco and husband Eddie and Cleta Southern, and a host of nieces and nephews, many friends, and acquaintances. A funeral service for Veta will be held 1:00 P.M. Friday, December 13, 2019 at the McClendon-Winters Funeral Home Chapel with Reverend Jack Vance officiating. Pallbearers will be Josh, Jake, Dallas, Dalton, Brendan McCall, and Ronnie Been. Interment will follow in the Okmulgee Cemetery. Friends may visit the funeral home Thursday from 1:00 P.M.-8:00 P.M. The family will be present from 6:00 P.M.-8:00 P.M. In lieu of flowers and an expression of sympathy, memorial contributions may be sent to Clarehouse 7617 S Mingo Rd, Tulsa, OK 74133

The family of Veta Fay 'Southern' Repsher created this Life Tributes page to make it easy to share your memories.

Veta Fay ‘Southern’ Repsher, a resident of Okmulgee passed from...