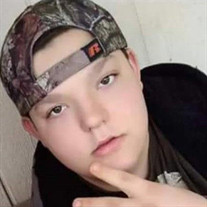 Trey Lynn Holmes was born January 22, 1999 in Okmulgee, Oklahoma. He passed away January 12, 2022 at the age of twenty two. Trey enjoyed anything outdoors, including the river, fishing, hunting, four wheeling and his dogs. He loved music and... View Obituary & Service Information

The family of Trey Lynn Holmes created this Life Tributes page to make it easy to share your memories.