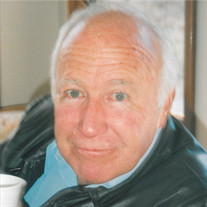 Tim Smith passed away Tuesday, July 10, 2018 at the Jack C. Montgomery Veteran’s Medical Center in Muskogee at the age of 95. Tim was born November 24, 1922 near Natura, one of ten children born to John and Oma (Hester) Smith. He graduated from Okemah High School. Tim served his country during World War II in the U.S. Army as a Mess Sargent on Navy Ships. He was stationed in San Francisco and made tours around Guam and the Hawaiian Islands. He met his wife, Dorothy Virginia Petty in California and they married on December 13, 1943. She preceded him in death on October 27, 1982. Tim was a farmer, raising peanuts, corn and cattle. He began his career as a firefighter in 1957, working for the Okmulgee Fire Department until his retirement in 1977. He later became a Road Foreman for Okmulgee County District 1. Tim owned Circle S Saddlery, repairing saddles and making tack. He then owned Cross Country Leathers in Beggs, designing and making motorcycle bags, chaps, vest and more. He could look at someone any size and fit them with chaps or vests. As a firefighter, Tim was known for his bravery and his son and grandson have followed in his firefighting legacy. Tim married Betty Norton on January 1, 1995 in Missouri. She preceded him in death on May 22, 2007. Tim loved and was dedicated to his family and took care of his parents to the end. In more recent years, Tim has lived with his family and has truly been a blessing to them. He was preceded in death by his parents, wives, and eight siblings. Survivors include his children, Arlene Wilcher and husband Bill of Tuttle, Ginny Hubbell and husband Phil of Tulsa, Tim N. Smith and wife Sherrie of Bristow and Valerie Watson and husband Reed of Wetumka, twelve grandchildren, thirty-five great grandchildren and a brother, Ronal Smith and wife Janet of Preston. A memorial service will be held 10:00 A.M. Saturday, July 14, 2018 at the McClendon-Winters Funeral Home of Okmulgee with Reverend Ben Williams officiating. Interment will follow in the Okmulgee Cemetery. Arrangements have been entrusted to the McClendon-Winters Funeral Home of Okmulgee. Memories, condolences, photos and videos may be shared with the family on Tim’s Tribute Page of our website at www.mcclendon-winters.com

Tim Smith passed away Tuesday, July 10, 2018 at the Jack C. Montgomery Veteran&#8217;s Medical Center in Muskogee at the age of 95. Tim was born November 24, 1922 near Natura, one of ten children born to John and Oma (Hester) Smith. He graduated... View Obituary & Service Information

The family of Tim Smith created this Life Tributes page to make it easy to share your memories.