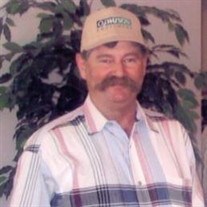 Chubby Dean Shaver born Thursday, October 20, 1955 in Tulsa, Oklahoma. Chubby passed away on Wednesday, August 23, 2017 in Tulsa at the age of 61. As a young man Chub was known as an accomplished bull rider. He enjoyed participating in hundreds of rodeos across several states along with his brother Buddy and close friend Billy. In 1974 Chub joined the Tulsa Local 592 Boiler Makers Union as a welder. He traveled across the country for several years until his retirement. He then worked with his son/ best friend/ welding partner Quinton Dean Shaver, and over the years gained the respected position of the father/ son welding team. Throughout these years of travels Chubs next favorite activity was storytelling, with so many adventures the humorous and sometimes tall tales were told and retold to audience after audience. Chub had a knack for capturing the humor and embellishing a story to reflect the personality that so many came to know fondly as Chub Shaver. Chub thought of everyone as family or friend. He never had a negative thing to say about anyone young or old, wealthy or not, every person was equal in his eyes and he made everyone feel important and worthy. Chub was preceded in death by his father Clint Shaver and mother Mary (Cooley) Shaver, son/best friend/welding partner Quinton Dean Shaver, brother-in-law Jess Horn, and nephew Arlie Cates. Chubs is survived by his daughter T.J Bell and son-in-law Matt Stiger of Beggs, sisters Carol Cates and husband Thomas of Bristow, Linda Horn of Edmond, brothers Sonny Shaver and wife Janie of Terlton, Larry Shaver and wife Judy of Corpus Christi, Texas, Buddy Shaver and wife Paula of Penrose, Colorado, grandson Aaron Bell and wife Kayla of Beggs, Andrew Fulton, Bryce, Drake Shaver, and Quinton Stiger, granddaughters Kyla Terry of Beggs, Mackenzie and Allicyn Cook, Tesza Shaver, and great grandson Brennoan Bell.

Chubby Dean Shaver born Thursday, October 20, 1955 in Tulsa, Oklahoma. Chubby passed away on Wednesday, August 23, 2017 in Tulsa at the age of 61. As a young man Chub was known as an accomplished bull rider. He enjoyed participating in hundreds... View Obituary & Service Information

The family of Thomas Dean Shaver created this Life Tributes page to make it easy to share your memories.