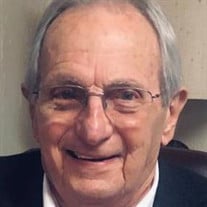 Thomas Kenneth Butler was born in Okmulgee, Oklahoma on April 5th, 1936. He went to be with God and join the rest of his ethereal family in Heaven on March 7th, 2020.Kenneth was a loving and thoughtful husband, father, grandfather, uncle, and friend. He attended St. Anthony school in Okmulgee, OCU in Edmond and received a law degree from the University of Oklahoma. He lived what is nothing short of an amazing life full of adventure, trials and tribulations. Kenneth practiced law for over 50 years, and he served his country in not only the United States Army, but also as an Oklahoma State Senator. Kenneth was passionate about his family and his other passions included practicing law, sports, billiards, politics and horse racing. At family gatherings everyone would seek him out and try to convince him to tell one of the many stories that he entertained us all with through the years. He had an endless supply of these that everyone would listen to with great care and they would usually end with everyone laughing intensely. Kenneth had numerous friends and colleagues scattered across the country and will be missed by all.Kenneth is survived by his wife Redeena Butler, son Arthur Latus and his wife Loretta, son Lester Minyard III (Trey) and his wife Danielle, daughter Courtney Butler-Golden and her husband Granvel Golden Junior, son Dale Risley, and son Aaron Butler and his wife Jill. He is survived by nine grandchildren, Jordan Roxanne Latus, Connor Patrick Latus, Cortni Cheyenne Risley, Granvel Golden, III (Trey), Colton Jarrett Risley, Lester Drew Minyard IV (Drew), Danica Lynn Minyard, Jocelyn Faye Butler and Ronan James Butler. He is also survived by many, many nieces and nephews as well as many other relatives, all of whom he was extremely fond.Preceding him in death were both his mother and father, Laura Faye and Earl R. Butler, Sr. Brothers Earl R. Butler Jr., Walter James ‘Jimmy’ Butler and sister Elizabeth Josephine ‘Betty’ Ammann.Kenneth lived a vibrant and rewarding life and always persevered regardless of the circumstances. We find peace in knowing that he is now young, vibrant and whole in our Heavenly Father’s arms with his mother, father and brothers and sister. A rosary will be held at McClendon Winters Funeral Home on Friday, March 13, 2020 at 7:00 pm. The family will receive friends beginning at 5:30pm. The funeral service will be Saturday at 10am at St. Anthony’s church which will be followed by a private burial at Okmulgee Cemetery. Arrangements have been entrusted to the McClendon-Winters Funeral Home of Okmulgee. Memories, condolences, photos and videos may be shared with the family on Kenneth's Tribute Page of our website at www.mcclendon-winters.com

Thomas Kenneth Butler was born in Okmulgee, Oklahoma on April 5th, 1936. He went to be with God and join the rest of his ethereal family in Heaven on March 7th, 2020.Kenneth was a loving and thoughtful husband, father, grandfather, uncle, and... View Obituary & Service Information

The family of Thomas Kenneth Butler created this Life Tributes page to make it easy to share your memories.

Thomas Kenneth Butler was born in Okmulgee, Oklahoma on April...