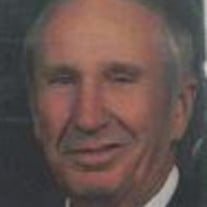 Theodore (Ted) James Maly was born June 14, 1931 in Bison, Oklahoma to Joe J. Maly and Mary (Houska) Maly. Ted went to be with Jesus October 7, 2020 in Muskogee, Oklahoma at 10:20 A.M. Ted was drafted in 1950 to the United States Army at Camp Hanigan in Washington State. Ted was then transferred to Fort Bliss in El Paso, Texas where he was stationed until he discharged from the Army in 1952. Ted moved back to Hennessey, OK and worked with his dad and mom on the farm and helped to do the wheat harvests. Ted was the proud father of five children which he ended up raising by himself. If Ted ever had the opportunity he would tell you how hard times were but how happy he was to have his children. Which he endeavored to teach good work ethics and to be hard workers and he loved them so much. Ted then went to work in Enid for Oklahoma Tire and Supply. Ted was then transferred from Enid to Okmulgee as assistant manager of Oklahoma Tire and Supply. Ted then had an opportunity to go to work at Montgomery Wards over the appliance and flooring department where he climbed the ladder to be offered a management job at the new Gibson’s Discount Center. Always knowing he wanted to own his on business. Ted then leased and operated the APCO Service Station in 1968 through 1975. Ted always desired to have a family business with his sons. Ted is survived by his wife Linda, sons Doug Maly, Victor Maly and wife Patti, Dennis Maly and wife Robin. Two daughters Karen Sheets and husband Steve, and daughter Barbara Hammer. Ted also leased the Fin Service Station and operated it until he had an opportunity to go to work at Randy’s Meat Co. in Okmulgee. Then he went to work in the insurance business at Fansher, Stone and Milroy. In 1997, Ted went to work with his son Doug at Quality Tire till retiring. Ted was an avid yard keeper and enjoyed being outside working in his yard. He also enjoyed his church and working for the Lord. Ted also enjoyed day trips until he wasn’t able. Ted loved being with his family and daily reminisce about Doug’s tire shop and all his memories there. Ted is also survived by his grandchildren Melissa Johnson and husband Randy, Meagan and husband Troy Marshall, Chris Sheets, Joey and Mary Maly, Ben Shelby, Brian George and wife Liz and children Khloe and Kyler and a deceased son Kaleb. Great grandchildren Zoie and Mallorie, Jolie, Rory and Conley and Christian Sheets. A family viewing will be held on Sunday October 11, 2020 from 1:00 P.M. -2:00 P.M. and a public viewing from 2:00 P.M. - 6:00 P.M. The funeral service will be held Monday, October 12, 2020 at 10:00 A.M. at McClendon-Winters Funeral Home Chapel. Arrangements have been entrusted to the McClendon-Winters Funeral Home of Okmulgee. Memories, condolences, photos and videos may be shared with the family on Ted’s Tribute Page of our website at www.mcclendon-winters.com

The family of Ted Maly created this Life Tributes page to make it easy to share your memories.