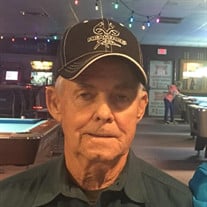 Terry Wallace Miller, lifelong Okmulgee area resident, passed away Tuesday evening, March 10, 2020 in Okmulgee. He was born December 25, 1941 in Okmulgee to the late Willard Wallace and Pauline Lena (Bandy) Miller. He served his country in the United States Navy. Terry worked for Okmulgee County Rural Water District #7 for 25 years and later he drove a truck. He was also known as the Okmulgee Garage Door Man. Terry married Connie (McPherson) Hall on November 9, 2004 in Eureka Springs. He enjoyed hunting, fishing and camping and was a member of Nuyaka Baptist Church. Terry was preceded in death by his parents, first wife, Peggy Miller, sister, Joyce Hicks and brother, Wayne Miller. Survivors include his wife Connie Miller of the home, a son, Steve Miller and wife Tina of Owasso, daughters, Pamela Hill of Okmulgee and Christy Hall of Nuyaka, grandchildren, Jeremy Ramsey of Tulsa and Blaine and Braxton Frost of Nuyaka, brothers, Jeff Miller, Ronnie Miller and wife Nelma of Texas and Donnie Miller of Sapulpa and numerous nieces and nephews. Friends may visit the funeral home on Monday from 12:00 P.M.-8:00 P.M. and the family will be present to receive friends from 5:00 P.M.-7:00 P.M. A funeral service will be held 10:00 A.M., Tuesday, March 17, 2020 at the Nuyaka Baptist Church with Reverend Clint Sinclair officiating. Interment will follow in the Okmulgee Cemetery. Memorial Contributions may be made in Terry’s name to the Nuyaka Baptist Church Falls Creek Camp Fund. Arrangements have been entrusted to the McClendon-Winters Funeral Home of Okmulgee. Memories, condolences, photos and videos may be shared with the family on Terry's Tribute Page of our website at www.mcclendon-winters.com

The family of Terry Wallace Miller created this Life Tributes page to make it easy to share your memories.