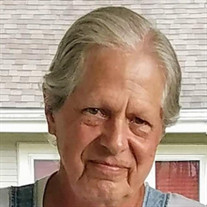 Terry Lee Cotner, 69 year old Sapulpa resident, passed away Sunday, March 13, 2022 at his home. Terry was born January 19, 1953 in Okmulgee to the late Walter G. “Dub” Cotner and Pauline (Sturgis) Cotner. He was raised in Okmulgee and graduated from Okmulgee High School in 1971. He was involved in the Drama Club, Boy Scouts, Band and athletics while in high school. Terry resided in Okmulgee, Mounds and Tulsa before relocating to Santa Fe, New Mexico. He later returned to Oklahoma and made Sapulpa his home. Terry was a carpenter and worked for Oklahoma Fixture Company and Zigler’s. He enjoyed listening to music, playing his guitar and being outdoors, especially camping and building campfires. He also enjoyed talking politics and drinking beer. Terry was preceded in death by his parents, a son, Dustin Cotner and an aunt, Ruth. Survivors include his children, Corinna Redfearn and husband Rick, Sarah Cotner and husband Randy and Nathan Cotner and wife Natasha, his companion, Marika Roberts, brother, Walt Cotner and wife Ruth and brother, Pat Cotner, and his grandchildren, Cory McVay, Aurora McVay, Natalie McVay, Lyli Cotner and Liam Cotner. A service to celebrate Terry’s life will be held 2:00 P.M. Thursday, March 24, 2022 at the McClendon-Winters Funeral Home Chapel with Reverend J. Clifton Briscoe officiating. Arrangements and cremation services have been entrusted to the McClendon-Winters Funeral Home of Okmulgee. Memories, condolences, photos and videos may be shared with the family on Terry’s Tribute Page of our website.

The family of Terry Lee Cotner created this Life Tributes page to make it easy to share your memories.