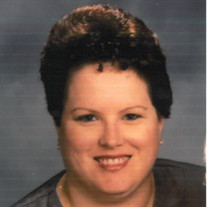 Terry (Tee) Kaye Jolliff Canchola was born March 22, 1968 in Okmulgee and died June 29, 2019 at MCNMC in Okmulgee. She attended school at Liberty Morris for nine years, and attended Morris High School for four years. During her time at Morris High School she was in color guard and played basketball. She continued her education at Connors State in Warner and three years at OSU Stillwater. During her college years she was on the horse judging team and in the equine program. She majored in Agriculture and Business management. She worked several years in Muskogee, and went to Plano, Texas in 1996 to work in the travel industry. While in Plano she met her husband Orlando Canchola, who was in law enforcement with the Lancaster Police Department. Her job took her to many foreign lands including Australia, Greece , Italy, England, Canada, and all across the United States. In 2014 her family relocated to her hometown of Morris, Oklahoma. She studied nursing and was employed at US cellular Corporate office, in sales and customer service, until her passing. She is survived by her husband Orlando Canchola, son David Ryan, and daughter Baylee Diane, parents Doug and Doris Jolliff, sister Tracy and husband Jerrell Dunlap of Liberty Morris, brother in law Stephen Canchola and sister in law Melinda Canchola of Lancaster, Texas, two nephews Colton and Tanner Dunlap, two nieces Maria Canchola of Grand Prairie, Texas, and Joy Canchola of Costa Masa, California, Uncle Dale and Connie Jolliff, Cousins Cody and Sara Jolliff of Okmulgee, Herb and Linda Jolliff of Oregon, Karrie and Ray Franklin of Okmulgee, Aunts Betty Workman, Joann Ledford, Mabel Breeding, Eunice Whisenhunt, Dorthy Taber, God daughter Sajel Perez of Lancaster, Texas, and many other aunts, uncles, cousins all across the country. Memorial Service and Celebration of life are planned for July the 13th at 11am, it will be held at the Liberty Baptist Church; 23570 Liberty Rd, Morris, OK 74445. Arrangements and cremation services have been entrusted to the McClendon-Winters Funeral Home of Okmulgee.

Terry (Tee) Kaye Jolliff Canchola was born March 22, 1968 in Okmulgee and died June 29, 2019 at MCNMC in Okmulgee. She attended school at Liberty Morris for nine years, and attended Morris High School for four years. During her time at Morris... View Obituary & Service Information

The family of Terry Kaye Canchola created this Life Tributes page to make it easy to share your memories.