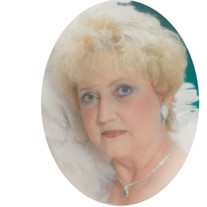 Arlene "Sue" Howard age 67, after a very difficult fight against a extremely aggressive fast growing cancerous brain tumor lost her battle here on earth and joined her Lord and Savior early Wednesday Morning, July 6, 2016. Shortly after high school, where she graduated from Nuyaka in 1967, she went to work for Ball Brothers, where she worked for several years. While working there she met S. Marles Howard and they were married January 22, 1971. After their two children were born she decided she wanted to remain home while her children were young and be a house wife and mother. After her children grew old enough to be busy doing their own things she decided to return to work. She started working for Harte Hanks cable where she remained for many years as the company changed hands and went through many changed until she finally retired from Cox's cable as a customer service representative. Although she missed helping her customers, she very much enjoyed all the extra time retirement gave her to enjoy her family. Which if you knew her, you know they were her pride and joy. Sue ( as everyone knew her by) was born to Andy William Crawford and Dorothy Mary (Slankard) Crawford on May 31, 1949 in Okmulgee. Sue was survived by her husband of 45 years S. Marles Howard of the home , one daughter Bobbie Sue Roach and husband Richard of Sapulpa, one son Dwayne M. Howard of the home, one granddaughter Stephanie Dill and her son Ashton (also known to the family as Memaws honey) of Sapulpa, one grandson Cody Roach and wife Amber and their children Sean and Emilee of Sapulpa, three sisters Loretta Honeywell of Sapulpa, Elenora Boyer and husband David of Bedford, Texas, Kay Brians and husband Tom of Morris, one sister-in-law Sharon Huxtable and husband Lindy of Ketchum, Oklahoma, one brother-in-law J.T Howard and wife Penny of Dewar, and a abundant amount of beloved nieces and nephews and cousins. A funeral service for Sue will be held at 2:00 p.m. on Monday, July 11, 2016 at McClendon-Winters Funeral Home Chapel of Okmulgee with Mr. Marvin Sears officiating. Casketbearers will be Richard Roach, Cody Roach, Ray Breeden, Sean Blackwell, Larry Myers, and Elmer Fulton. Friends may visit the funeral home on Sunday from 3:00-6:00 p.m. Arrangements have been entrusted to McClendon-Winters Funeral Home of Okmulgee.

The family of Sue Howard created this Life Tributes page to make it easy to share your memories.

Arlene &quot;Sue&quot; Howard age 67, after a very difficult fight against...