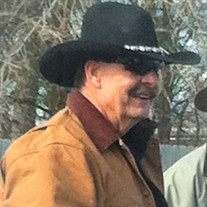 Steven Earl McCroskey was born June 23, 1953 in Pauls Valley, Oklahoma to Jack Earl and Betty Ann (Watkins) McCroskey. He grew up in Stillwater, Oklahoma and was a longtime Okmulgee County resident and Oklahoma Highway Patrol Trooper. Steve passed away on Tuesday morning, January 4, 2022 in Tulsa at sixty eight years of age. Steve retired from the Oklahoma Highway Patrol on November 30, 2007 after serving for twenty five years. After retiring, he was the Security Officer at Wilson School and enjoyed umpiring baseball. He loved anything outdoors, whether it was camping, hunting, fishing, kayaking or gardening. He made several trips to South Africa hunting. Steve cherished the time he spent raising hogs with his daughter. He was a member of the First Baptist Church in Okmulgee. Steve married Janice (Terry) Pierce on September 24, 2016 in Okmulgee. He was preceded in death by his brother, Mark McCroskey. Survivors include his wife, Janice McCroskey, parents, Jack and Betty McCroskey, son, Jerry McCroskey and wife Jennifer, daughter, Kenna McCroskey, sister, Jan O’Meara and husband Mike, nephew, Kirby O’Meara and wife Hannah and niece, Amy Klein and husband Adam. Funeral services for Steve will be held 10:00 A.M., Saturday, January 8, 2022 at the First Baptist Church in Okmulgee with Dr. Dennis Taylor officiating. Interment will follow in the Wilson Salt Creek Cemetery. Members of the Oklahoma Highway Patrol Honor Guard will serve as casket bearers. The family will receive friends on Friday evening from 5:00 P.M. – 7:00 P.M. at the funeral home. Arrangements have been entrusted to the McClendon-Winters Funeral Home of Okmulgee. Memories, condolences, photos and videos may be shared with the family on Steve’s Tribute Page of our website at www.mcclendon-winters.com

The family of Steven Earl McCroskey created this Life Tributes page to make it easy to share your memories.