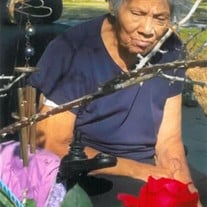 Sally Ann Good Voice passed away on Thursday, November 15, 2018, at her home in Okmulgee surrounded by her family. Sally was born to the late Walter and Mary (Yahola) Jones in Okfuskee County, on Saturday, December 2, 1939. She loved sitting... View Obituary & Service Information

The family of Sally Ann Good Voice created this Life Tributes page to make it easy to share your memories.