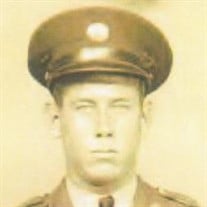 Roy L. Johnson (Jody) was born June 13, 1920 in rural Okmulgee County, south of Morris to the late John W. Johnson and Amanda L. (Baker) Johnson. He was the eighth of nine children. Jody passed away Sunday, September 4, 2016 in Tulsa at 96 years of age. He is survived by his four children, Ann Smith, Diana Raney, Mike Johnson, and Sue Lucas, eleven grandchildren, eighteen great grandchildren, and five great, great grandchildren. He was preceded in death by his wife Helen Goddard Johnson, a daughter, Pamela Williams, two granddaughters, Rebecca Smith and Stephanie Acker and his first wife and mother of his children, Pauline Marie Ballard. Also, all of his siblings, Ethel, Irene, Alice Loague, Elmer and Denver Johnson, Carrie Casto, Marie and "J.W" preceded him in death. Jody attended school in Morris and Prairie Bell. In 1937 he served in CCC with his uncle James Franklin Johnson. Together they helped build Mesa Verde National Park in Colorado. He served in the US Army from January 1942 to December 31, 1945 in the 10th Armed Division serving in Belgium, France, Germany and saw combat in the Battle of Bulge. He also served a brief time in Philipines. Upon returning from the war, Jody worked at White Hill Oil Company for twenty years, and later was a carpenter for thirty years. He enjoyed time spent around the pond at Claremore Veterans Center and feeding the geese and turtles. He loved telling stories about his military days. Jody was a member of the First Assembly of God Church in Okmulgee, Okmulgee Round Up Club and Square Dance Club.

The family of Roy "Jody" Johnson created this Life Tributes page to make it easy to share your memories.