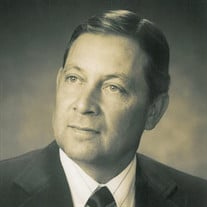 Senator Robert Lee (Bob) Miller, 89, of Beggs, died at 7:00 a.m. on September 5, 2019 at his daughter’s home in Morris. He was a lifelong rancher and State Senator for two terms. He was a member of Beggs First Baptist Church. He was an original founder of the Intertribal Agriculture Council and served on the board until his death. He loved his family and friends and loved visiting with everyone. Robert was a great storyteller and had so many great stories to tell. Robert L. (Bob) Miller was born September 16, 1929, in Okmulgee, Oklahoma. He grew up on the Miller IX Ranch in Okmulgee County. He graduated from High School at Twin Hills, OK and went on to graduate college at Oklahoma A&M. He married his wife, Lydia Jane Rains, on his birthday, September 16, 1952 in Muskogee, Oklahoma. They have two daughters Linda Kathryn Enlow and Lea Ann Nix. Robert is survived by his wife of almost 67 years, Jane, of the home, two daughters, Linda Kathryn Enlow and husband, Dewey, of Sapulpa, OK and Lea Ann Nix of Morris, OK; six grandchildren, Crystal Rogers and husband Barrett of Stafford, VA, Robert Nix of Ruidoso, NM, Matthew Nix of Morris, OK, Josh Enlow and wife, Julie of Sapulpa, OK, Jolynn Jeter and husband, David of Ramona, OK, JanEtte Oakley and husband, Brody, of Maple Valley, WA. Thirteen great-grandchildren, Haylee and Caitlyn Rogers of Stafford, VA, Dayson Nix of Okmulgee, OK, Halle Nix of Glenpool, OK, Alexis, Leo, Allie, and Ainsley Enlow of Sapulpa, OK, Lea and Declan Jeter of Ramona, OK, Caroline, Zane and Rex Oakley of Maple Valley, WA. His brother, David Miller and wife, Esther of Okmulgee, and a host of nieces and nephews as well as numerous friends. He was preceded in death by his parents, Bluford and Mamie Miller, sister, Juliet Adelman and two brothers, Johnny and Bluford Miller. A funeral service for Robert will be held 2:00 PM Tuesday, September 10, 2019 at the First Baptist Church in Morris. Viewing will be Monday, September 9, 2019 from 12:00 pm until 8:00 pm at the McClendon-Winters Funeral Home Chapel in Okmulgee. Visitation with the family present will be from 6:00pm to 8:00pm. Interment will follow at the Miller Ranch Cemetery in Bixby, Oklahoma. Arrangements have been entrusted to the McClendon-Winters Funeral Home of Okmulgee.

Senator Robert Lee (Bob) Miller, 89, of Beggs, died at 7:00 a.m. on September 5, 2019 at his daughter&#8217;s home in Morris. He was a lifelong rancher and State Senator for two terms. He was a member of Beggs First Baptist Church. He was... View Obituary & Service Information

The family of Robert L. Miller created this Life Tributes page to make it easy to share your memories.