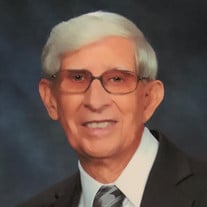 Robert J. Malcom was born January 8, 1922 in Andover, Kansas to the late Lee and Edith (Allred)Malcom. He passed away September 2, 2019 at Saint Francis Hospital in Tulsa at the age of 97. Bob was raised in Andover, Kansas and married Helen Rose Harkrader on May 17, 1942. He and Helen were faithful members of the First Church of the Nazarene in Okmulgee. Preceding him in death were his parents, brother, Richard Malcom and a granddaughter, Mary Beth Gonzales. Survivors include his wife of 77 years, Helen Malcom, daughters, Camelia Malcom of Okmulgee, Shelene Hubbert and husband Mark of Fifty-Six, Arkansas, Gwyn Hubbert and husband Stephen of Stuart, Oklahoma and Amy Powell and husband Rick of Santa Ana, California, his grandchildren, Lani, Joanna, Jason, Sunny, Tanner, Jill, Ben, Robert Abraham, Stacia, Madeline and Drake, twenty one great grandchildren, siblings, Max Malcom of Wichita, Kansas, Pat Rahal of Andover, Kansas, Charles Malcom of Andover, Kansas and Virginia Bontz of Plano, Texas, a host of family and friends and his good dog Millie. Bob and Helen were high school sweethearts and married immediately after graduation shortly before Bob started his service in World War II. He served with the 60th Air Depot Squadron in the Southwest Pacific. After the war they made their home in Andover, Kansas where Bob worked at the family business, the Malcom Garage. He studied Auto Mechanics and Industrial Education at Pittsburgh State Teacher’s College. In 1960 they moved to Billings, Oklahoma where Bob built Senator Henry Bellmon’s home. During the next few years Bob did finish carpentry in Oklahoma City. In 1965, Bob and Helen moved their family of 4 girls to Okmulgee, OK where Bob began his career at OSU Tech in the Auto Mechanic’s department before moving to Building Construction where he passed on his love of woodworking and became a mentor to many of his students. He retired in 1984, but certainly didn’t stop working. He continued to do wood crafting for family and friends and spent many hours restoring their 1919 craftsman home and was always on call to fix anything at church. He was a very skilled craftsman. He also enjoyed gardening, fishing, tinkering on “Ole Blue”, his ’55 Chevy truck, watching a western and picking out a good watermelon. Anyone who knew Bob could count on him for a helping hand. He could fix almost anything and the bigger the challenge the more he enjoyed figuring it out. He a selfless man, never taking the last piece of pie and making sure you had enough gas money for the trip home. He was consistently gentle, helpful, optimistic, kind, interested in others and honorable. Bob and Helen had a beautiful love story for 77 years. They lived selflessly, lovingly raised 4 girls, cared for those around them and remained deeply in love. They were the purest example of a faithful, well-lived life together. Bob loved spending time with his grandchildren and great-grandchildren and was adored by each of them. He was loved by all and will be greatly missed. In Lieu of flowers the family request donations be made to The Kingdom Kids at the First Church of the Nazarene.

Robert J. Malcom was born January 8, 1922 in Andover, Kansas to the late Lee and Edith (Allred)Malcom. He passed away September 2, 2019 at Saint Francis Hospital in Tulsa at the age of 97. Bob was raised in Andover, Kansas and married Helen... View Obituary & Service Information

The family of Robert J. Malcom created this Life Tributes page to make it easy to share your memories.