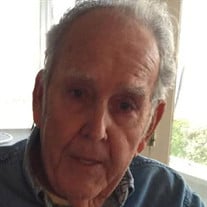 A memorial service for Robert “Bob” Paul Hess, 85, Okmulgee, will be held at 2:00 p.m. on Friday, August 18 at First Christian Church in Okmulgee with Reverend Charlie Green officiating. Services will be conducted by McClendon-Winters Funeral Home. Bob died Sunday morning, August 13, 2017 at his home surrounded by family. He was born on April Fool’s day, 1932, a thirteen pound bundle of Bob, the youngest of five children in Decatur, Illinois to Katie Harmon and William Fred Hess. Bob spent his early years there and later moved to Herrick, Illinois where he met and married his wife of 54 years, Louise Smart. Bob served in the Air Force and with the support of the GI Bill, Mom and a job on the railroad, earned a Bachelor of Science degree in Engineering Administration from Millikin University. Upon graduation, he worked for Pittsburg Plate Glass in Decatur, Illinois and then in 1964, moved the family to Okmulgee, Oklahoma for a job in management with American Saint Gobain Glass. He later purchased Marshall Plastics Company as well as multiple rental properties in Okmulgee. His key community work included serving as Trustee and Deacon of the First Christian Church, serving terms on the Okmulgee Public School Board including president, and participating as member of the Cattlemen Association. A faithful Rotarian, he was recognized as a Paul Harris Fellow. He also supported multiple state institutions of higher education, as he had at least one kid in college for twenty consecutive years. He was preceded in death by parents Katie and Fred Hess, sister Mildred and brother Fred “Junior” Hess, and his wife Louise. Surviving him are sister Anetta Campbell and brother Homer Hess. Bob leaves behind six children: Dr. Randy and Debbie Hess, Holly and Don Martin, Dr. Cindy Hess and Frank Duncan, Rob and Margaret Hess, Lou Anne Hess, and Rick and Kathy Hess. He also leaves behind his loved companion of the last seven years, Pat Groff. Grandchildren include Lauren Hess, Joan Hess & Cody Anderson; Dr. Emily and Jason Bussey, John and Nonya Martin, Scott Martin; Jackson, Alex and Mark Hess; Robert, Austin and Tyler Walters; and Jordan and Blake Hess. Great grandchildren include Marielle, Vivian, Corrine, and Lucia Bussey; Andrew Martin; and Hess Anderson. Dad was happiest with a project. He could take anything apart, fix it, and put it back together – typically with duct tape, wire and the least expensive replacement part. He was pleased to have bought Mom her dream home in the country where they could see the sun come up and go down every day of the year - their piece of heaven on earth. Although he was not that ‘into’ the work involved with Mom’s flowers, bushes, and trees, he did enjoy his tractors, cattle, and a stint with oil and gas wells. His interests also included frightening small children and quite grown adults; he loved practical jokes, and did his best to keep all of us on our toes. His chili was legendary and a constant staple at family gatherings. Instead of good-bye, dad would often say ‘glad you got to see me.’ And so we were! And so we are. In lieu of flowers, the family requests that memorials be made to the charity of your choice or to the Louise and Bob Hess Memorial Scholarship at Oklahoma State University – Institute of Technology (OSU-IT). www.osugiving.com and search "Hess". Arrangements have been entrusted to the McClendon-Winters Funeral Home of Okmulgee. Memories, condolences, photos and videos may be shared with the family on Bob’s Tribute Page of our website at www.mcclendon-winters.com

A memorial service for Robert &#8220;Bob&#8221; Paul Hess, 85, Okmulgee, will be held at 2:00 p.m. on Friday, August 18 at First Christian Church in Okmulgee with Reverend Charlie Green officiating. Services will be conducted by McClendon-Winters... View Obituary & Service Information

The family of Robert (Bob) Paul Hess created this Life Tributes page to make it easy to share your memories.