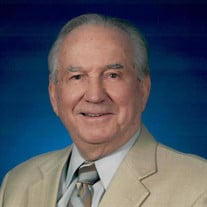 Robert Maxwell Barnard went to be with our Lord on August 22, 2020, at the age of 95. After a few months of declining health Bob died peacefully in his sleep. Bob was born in Cromwell, Ok on May 15th, 1925. He met his future wife of 74 years, Nila Jean Vaughan, in high school, but World War II delayed their marriage. While Nila attended Oklahoma A&M, Bob joined the 3rd Marine Division and fought in the Pacific theater. He was involved in the invasions of Bouganville, Guam and Iwo Jima. After World War II, Bob returned home to Tulsa, Oklahoma, married Nila and went to work as sporting goods manager at Clark Darland Hardware store. Their first son, Gary, was born in Tulsa and a few months later Bob was transferred to the Seminole store to take over as Manager. A few years later they moved to Okmulgee where Bob was Sporting Goods Manager for Jack Bell Lumber. Their second son, Craig, was born a few months after the move to Okmulgee. Later, Bob spent a decade as an agent for John Hancock Insurance before becoming one of the investors that built Rebold Manor. He spent 45 years as an Administrator/Owner of Rebold and Leisure Manor before building Plantation House Assisted Living Center. Bob was a leader at the local, state and national level and earned several awards, including Outstanding Young Man of the Year in Oklahoma by the State Junior Chamber of Commerce, John Hancock National Quality Award Winner and Lions Club President of the Year for Oklahoma. Local leadership positions Bob held include President of the Okmulgee Junior Chamber of Commerce, President of the Okmulgee Lions Club, Executive Director of the Okmulgee Chamber of Commerce, President of the Okmulgee Country Club Board, President of Diversified Investments, Chairman of March of Dimes, Board of Trustees for the First United Methodist Church, Chairman of the United Fund and President of both Tri-Bar Properties and Tri-Bar Energy. Bob's leadership roles at the state level include being a 2 time President of the Oklahoma Nursing Home Association and a member of that Board for over 30 years, 2 time Chairman of the Board of Oil Law Records in Oklahoma City and a board member of PLC Data Corporation in Oklahoma City. On a national level Bob was on the American Nursing Home Association and was a Regional Vice President for the American Nursing Home Association. In addition to all of that, Bob made time to be a loving husband to Nila for three quarters of a century. He was loved and respected by his children, grandchildren and great grandchildren. Bob is survived by his wife Nila, his sons Craig and Gary, 4 grandchildren and 13 great grandchildren, a niece, a nephew and many dear friends. And he could tell you stories until he lost his voice. Bob's memorial service is at 1pm, Wednesday, September 2nd at First United Methodist Church, Okmulgee, Oklahoma. Because of cancer in Bob's immediate family, this memorial service will follow CDC pandemic rules by requiring masks and social distancing at the church. Memorial Contributions may be made to the St. Jude Children’s Research Hospital or the Oklahoma Medical Research Foundation. Arrangements have been entrusted to the McClendon-Winters Funeral Home of Okmulgee. Memories, condolences, photos and videos may be shared with the family on Bob’s Tribute Page of our website at www.mcclendon-winters.com

Robert Maxwell Barnard went to be with our Lord on August 22, 2020, at the age of 95. After a few months of declining health Bob died peacefully in his sleep. Bob was born in Cromwell, Ok on May 15th, 1925. He met his future wife of 74 years,... View Obituary & Service Information

The family of Robert Maxwell Barnard created this Life Tributes page to make it easy to share your memories.

Robert Maxwell Barnard went to be with our Lord
on August 22,...