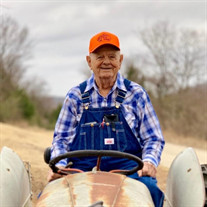 Richard L. Whitlow, passed away Tuesday, February 15, 2022 at his home at the age of 89. Richard was born in Shawnee, Oklahoma to Birtie and Grace (Bessinger) Whitlow on March 19, 1932. Richard was one of eight children, he being the only boy. He grew up in Newcastle, Oklahoma, where his family owned a store, farmed, and ran a dairy. Richard worked as a young boy in the dairy and picking cotton with his sisters. After his family sold the store, the family moved to Prague where he graduated high school. Richard and Jeanie (Bynum) married on July 12, 1952 in Oklahoma City. He worked for Phillips 66 in various places. In 1963, they settled in Okmulgee, making this their home, and raising their family. Richard was very involved in the community serving as a Preacher, was an honorary member of the Extension Homemaker Club (HCE), helped build birdhouses with the local 4H kids, and was a Board Member of RWD # Seven. He was a member of the Southside Church of Christ. Richard enjoyed gardening, golfing, and being outdoors. After his retirement he began wood working. He is preceded in death by his parents Birtie and Grace, his wife Jeanie of 68 years, sisters, Ruby, Lois, Lucille, Louise, Ella Mae, Doris, and Almeda. Survivors are son Richard M. Whitlow and wife Francie of Boswell, OK, daughters Susie Smith of Okmulgee, OK, Teresa Minson and husband Jim of Grant, OK, Kristy French and husband Bill of Perkins, OK, Jeanee Almond and husband Curtis of Austin, TX, fourteen grandchildren, twenty-two great-grandchildren and one great-great grandchild. Viewing will be Sunday, February, 20, 2022 from 3:00 P.M. -7:00 P.M., the family will receive friends and family from 3:00 P.M. – 5:00 P.M. at the McClendon-Winters Funeral Home Chapel. Funeral services for Richard will be held at 11:00 A.M., Monday, February 21, 2022 at the McClendon-Winters Funeral Home Chapel in Okmulgee with Jerry McCorkle officiating. Interment will follow in the Piligrams Rest Cemetery in Newalla, OK, with Pat Mannon officiating. Pallbearers will be J.R. Minson, Zachery Minson, Kevin Minson, Loy Smith, Tony Whitlow, Kent Whitlow, and Ryan Almond. Honorary Pallbearers will be Curtis Almond, Dustin Dye, Lynn Fischer, and Rusty Springer. Arrangements have been entrusted to the McClendon-Winters Funeral Home of Okmulgee. Memories, condolences, photos and videos may be shared with the family on Richard’s Tribute Page of our website at www.mcclendon-winters.com

Richard L. Whitlow, passed away Tuesday, February 15, 2022 at his home at the age of 89. Richard was born in Shawnee, Oklahoma to Birtie and Grace (Bessinger) Whitlow on March 19, 1932. Richard was one of eight children, he being the only boy.... View Obituary & Service Information

The family of Richard L Whitlow created this Life Tributes page to make it easy to share your memories.