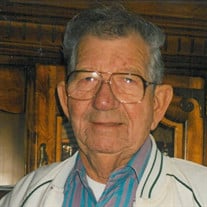 Richard Leroy Roach passed away Sunday morning, February 26, 2017 at his Beggs residence. He was 84 years of age. He was born June 6, 1932 in Beggs to the late Burton Neal and Rosie Marie (Bell) Roach. He graduated from Beggs High School and joined the U.S. Air Force. Richard worked for many years at Lear Siegler Service, Inc. as a Production Manager before retiring as a maintenance mechanic from Kelco May 31, 1993. He married Bonnie D. Parham on August 21, 1976 in Arlington, Texas. Richard was a member of the Crossroads Baptist Church, the Beggs Masonic Lodge, Guthrie Scottish Rite and the Veterans of Foreign Wars. He was preceded in death by his parents, a brother, Donald Neal Roach and a sister, Hallie Geraldine Smith. Richard is survived by his wife Bonnie of the home, sons Philip Roach and wife Shannon of Houston, Joshua Roach and wife Audrey of Sapulpa and Garry Roach and wife TeShauna of Beggs, a sister, Bonnie Mears of Jenks, grandchildren, Brooks Roach of Austin, Texas, Brett Roach of Norman, Allie Roach, Kylee Roach and Zedekiah Roach, all of Sapulpa, Haley Roach of Norman and Aidan Roach of Stillwater, step-grandchildren, Whitney Bible and husband Kory of Keifer and Timothy Hicks and wife Braidee of Glenpool and a step-great granddaughter, Briley Bible. A funeral service for Richard will be held 10:00 A.M. Wednesday, March 1, 2017 at the Crossroads Baptist Church with Reverend Travis Markes officiating. Interment will follow in the Beggs Cemetery. Casketbearers will be Tim Hembree, Buz Henson, Larry Harvey, Aidan Roach, Brett Roach and Jimmy Wesley. Honorary casketbearers will be Johnny Hereden, Bill Chambers, Ronnie Green and Dan Kohler. Friends may visit the funeral home on Tuesday from 2:00 P.M. to 8:00 P.M. and the family will receive friends beginning at 6:00 P.M. Arrangements have been entrusted to the McClendon-Winters Funeral Home of Beggs. Memories, condolences, photos and videos may be shared with the family on Richard’s Tribute Page of our website at www.mcclendon-winters.com

Richard Leroy Roach passed away Sunday morning, February 26, 2017 at his Beggs residence. He was 84 years of age. He was born June 6, 1932 in Beggs to the late Burton Neal and Rosie Marie (Bell) Roach. He graduated from Beggs High School... View Obituary & Service Information

The family of Richard Leroy Roach created this Life Tributes page to make it easy to share your memories.