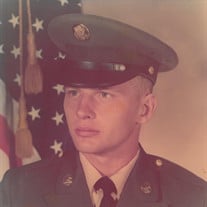 Richard Bryan Notley passed away on April 25, 2022, in Okmulgee, Oklahoma at the age of 66. He was born to Marvin and Mildred (Tobey) Notley in Bartlesville, Oklahoma on June 1, 1955. He was known to most friends as Bryan. He grew up in Miami, OK and graduated high school as a Miami Wardog. He later attended OSU-Tech, where he would meet his lovely wife, Kathleen Evans. They married on September 15, 1975, in Springdale, Arkansas. Shortly after Bryan enlisted in the United States Army where he served in the First Persian War. His Army career of sixteen years took him to many places across the globe, but they always called Okmulgee “Home”. After retirement from the Army, he enrolled at University of Tulsa where he earned a bachelor’s degree and master’s degree in Mechanical Engineering. He then went to work at LIMCO until his retirement. Bryan enjoyed a good game of pool and he liked to bowl. As he began to have grandchildren, they soon became his second love. Bryan also watched superhero movies. He loved to eat German food and would share his enthusiasm of food appliances with his family. Bryan said his daughter in law Amanda made the best pea salad. Bryan also enjoyed an occasional visit to the casino. His grandchildren thoroughly loved him. He is preceded in death by his parents Marvin and Mildred, wife Kathy, Beuford and Bosco. Bryan is survived by his children Toby Notley and wife Amanda of Henryetta, Jeff Notley and wife Audrey of Broken Arrow, Donna Watford and husband Don of Okmulgee, grandchildren Montgomery, Skyla, Aiden, Evan, Koby, Owen, Kamdon, Pyper, brother Bruce Notley and wife Kathy of Bethany, and sister Julia Anderson and husband Daryl of Fort Smith, AR. Visitation for Bryan will be Thursday, April 28, 2022, from 1:00 PM to 6:00 PM at the McClendon-Winters Funeral Home Chapel. Funeral services will be Friday, April 29, 2022, at 2:00 PM at the McClendon-Winters Funeral Home Chapel. Arrangements have been entrusted to the McClendon-Winters Funeral Home of Okmulgee. Memories, condolences, photos and videos may be shared with the family on Bryan ’s Tribute Page of our website at www.mcclendon-winters.com

Richard Bryan Notley passed away on April 25, 2022, in Okmulgee, Oklahoma at the age of 66. He was born to Marvin and Mildred (Tobey) Notley in Bartlesville, Oklahoma on June 1, 1955. He was known to most friends as Bryan. He grew up in Miami,... View Obituary & Service Information

The family of Richard B Notley created this Life Tributes page to make it easy to share your memories.