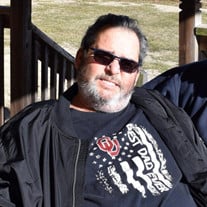 Richard Thomas Branson, of Sapulpa, OK was born February 7, 1966 in Okmulgee, Oklahoma he passed from this life on June 24, 2021 at the age of 55. He is survived by his wife, Kathy Branson, of the home and children, Cody Branson, his wife and three children, of Merkel, Texas; Nicholas Chissoe, his wife and one child, of Tulsa, OK; Autumn Priest of Oklahoma City, OK; Alexis Branson of the home; Payton Branson of Mannford, OK; and Abby Branson of the home. He is also survived by his mother, Rita May Branson of Beggs, OK; brothers, Barry Branson and his wife of Sperry, OK; Jack Branson and his wife of Beggs, OK; John Branson and his wife of Tulsa, OK; Mike Whittenburg, a brother-in-law of Beggs, OK; Jenny Branson, a sister-in-law of Beggs, OK, numerous nieces, nephews, cousins and a host of friends. He was preceded in death by his dad, Barry Gene Branson, a sister, Loretta Mae Branson, and two brothers, Howard Andrew Branson and Arthur Bill Branson. Richard was a graduate of Beggs High School, the class of 1984. After graduating high school he took a job with Hamilton Construction traveling across the United States. Then he went to Climate Control Institute of Tulsa, OK, where he graduated from the Heat and Air division. After graduating he worked at several apartment complexes across Tulsa. All the time owning his own heating and air conditioning business. Later on he found his way to the oil fields of Oklahoma. This is where he spent the rest of his life. It has been said “that once you get the oil on your hands you cannot get it out. Well, it is not the hands that the oil gets. It gets in your soul”. Richard enjoyed this life. It took him all over Oklahoma, Wyoming, North Dakota, Texas and across the world. He finished his career in the oil fields of Saudi Arabia. Richard was loved by his family and all those he worked with. He enjoyed his days off, filling them with family vacations across the United States, visits to see his grandchildren, and St. Louis Cardinals on tv and in person at Bush Stadium. A funeral service will be held 2:00pm Monday June 28, 2021, at Crossroads Baptist Church. Interment will follow at the Beggs Cemetery.

Richard Thomas Branson, of Sapulpa, OK was born February 7, 1966 in Okmulgee, Oklahoma he passed from this life on June 24, 2021 at the age of 55. He is survived by his wife, Kathy Branson, of the home and children, Cody Branson, his wife and... View Obituary & Service Information

The family of Richard T. Branson created this Life Tributes page to make it easy to share your memories.