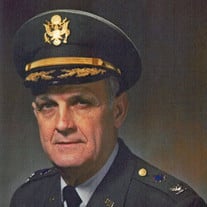 Colonel Raymond D. Toothaker, a longtime resident of Okmulgee, died 14 April 2018. He was born 7 March 1931 at Van Buren, Arkansas, as the second of five children born to Everett and Edna (Sallee) Toothaker, who preceded him in death, as well as a brother, Allen Ray and infant sister, Alice Ann. Raymond is survived by his wife of 67 years, 9 months and 14 days, Connie Ruth Roberts Toothaker. They started school together in first grade at Van Buren. They were married on July 1, 1950 in Van Buren, Arkansas. He is also survived by a son, Dr. Randy Toothaker of Marion, Iowa, daughter Sandra Attebury of Jenks, grandsons, Matthew Smith of Edmond, Christopher Toothaker of Denver, Nathan Toothaker of Marion, and Everett Toothaker of Marion, granddaughter, Isabella Toothaker of Marion, brothers, Jack Toothaker of Van Buren and Ronnie Toothaker and wife Barbara of Fayetteville, Arkansas, sister-in-law, Norma Jean Toothaker of Van Buren and several nephews and nieces and many, many friends. Raymond was a longtime Postal Employee, retiring as the Okmulgee Postmaster in 1986. He was a retired Army Colonel serving over 39 years in the Regular Army, National Guard and Army Reserves. He served with the 10th Field Hospital at Wurzburg, Germany and the 24th General Dispensary at Schweinfurt, Germany during the Occupation Days of West Germany. He also served at Army Posts in California, Texas, Oklahoma, Arkansas, Louisiana, Mississippi, Georgia, New Jersey and Pennsylvania. He was a graduate of the Command and General Staff College at Ft. Leavenworth, Kansas, Medical Service Corps School at Brooke Medical Center, San Antonio, Texas, the Basic and Advance Infantry Schools at Ft. Benning, Georgia and many other Military Schools to include the Navy’s Counter Insurgency School at Coronado, California. Raymond served on the Creoks Mental Health Board, was a member and President of the Okmulgee Cemetery Association, was a Volunteer of the Okmulgee Hospital Auxillary, member of the VFW, American Legion and Life Member of the Reserve Officers Association of the United States. He attended the First Baptist Church with regularity until health didn't permit. A funeral service will be held 2:00 P.M. Tuesday, April 17, 2018 at the First Baptist Church of Okmulgee with Dr. Dennis Taylor and Reverend Jerry Fielder officiating. The family will greet friends following the service. Interment will follow in the Okmulgee Cemetery. Casketbearers will be Darrell Wright, Ken Wilson, Henry Stone, Jack Crenshaw, Bruce Attebury and David Wright. Honorary Casketbearer will be Tim Boone. Arrangements have been entrusted to the McClendon-Winters Funeral Home of Okmulgee.

Colonel Raymond D. Toothaker, a longtime resident of Okmulgee, died 14 April 2018. He was born 7 March 1931 at Van Buren, Arkansas, as the second of five children born to Everett and Edna (Sallee) Toothaker, who preceded him in death, as well... View Obituary & Service Information

The family of Raymond D. Toothaker created this Life Tributes page to make it easy to share your memories.