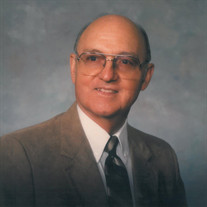 Raymond Delbert (R.D.) Niles Miller, M.D., departed this life on November 27, 2020 after a brief illness. Ray was born on July 18, 1922 to R.D. and Nono Niles Miller in Hollis, OK. Ray was the eldest of three sons. He graduated from Hollis High School and attended three years of college at the University of Oklahoma. He was admitted to OU School of Medicine as a member of the US Army and graduated in 1946. He completed his residency at the VA Medical Center in Indianapolis, IN. He continued his military service in the US Air Force Reserve and retired as a Lieutenant Colonel. He was first employed as a physician at the VA Medical Center in Muskogee, OK. While a staff physician at the VA, he met the love of his life, Patricia Burgess. They were married on December 6, 1952 and added two daughters to the family. Together Pat and Ray celebrated 65 years of marriage. In July 1953, Dr. Fred Watson was recruiting physicians to Okmulgee and Dr. Miller moved to Okmulgee to practice medicine and stayed the remainder of his life. Upon moving to Okmulgee, he and Pat joined the First Methodist Church and became active members of the Harmony Class. Dr. Miller became an integral part of the Okmulgee medical community, first at the old Okmulgee Hospital and then at OMH Medical Center where he served as Chief of Staff several times. He served on the admissions board of the OU School of Medicine for a few years. For over sixty years he was the Medical Director of the Okmulgee County Health Department. Dr. Miller had a private medical practice for over forty years delivering hundreds of babies, making house calls and touching many lives. He also served as Medical Director for several nursing homes in the community. Upon retiring in 1994, Dr. Miller continued to see patients at OMH Outpatient Clinic. This allowed him to enjoy more free time. He kept his medical license until 5 years ago, at that time completely retiring from medicine. Dr. Miller was an avid OU football fan and had season tickets for years. During retirement, he enjoyed being a grandfather (Poppy) to Eddie and Ray, taking his daily walks, reading, fishing, traveling with family and especially Colorado. He loved word puzzles and could answer a Wheel of Fortune puzzle with only a couple of letters and rarely missed a broadcast of Lawrence Welk. He was preceded in death by his parents, wife Pat, and brother Dr. Jene Miller. He is survived by daughters Martha (Dan) Blevins of Tulsa, Beth (Ed) Martin of Midwest City and grandsons, Eddie Martin of Tulsa and Ray Martin of Tulsa. Donations may be made to First United Methodist Church in Okmulgee, VFW or OETA. Arrangements have been entrusted to the McClendon-Winters Funeral Home of Okmulgee. Memories, condolences, photos and videos may be shared with the family on Dr. Miller ‘s Tribute Page of our website at www.mcclendon-winters.com

Raymond Delbert (R.D.) Niles Miller, M.D., departed this life on November 27, 2020 after a brief illness. Ray was born on July 18, 1922 to R.D. and Nono Niles Miller in Hollis, OK. Ray was the eldest of three sons. He graduated from Hollis... View Obituary & Service Information

The family of Raymond D. Miller M.D. created this Life Tributes page to make it easy to share your memories.