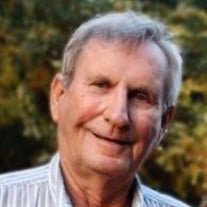 Raymond Gene Hutchinson was born on May 7, 1934 in Okmulgee Oklahoma to the late Everett Ray and Shirley Delight (Hayden) Hutchinson. Raymond passed away peacefully at home on Saturday, March 14, 2020. He was raised in Okmulgee where he attended Okmulgee High School graduating in 1952. While in school, Raymond enjoyed playing many sports and spent weekends dancing with his friends at Teen Town. Raymond continued to enjoy dancing throughout his life. Upon graduation, he attended college and became a lifelong OU fan. In 1956, Raymond married Phyllis Hammons. The couple moved to San Antonio, Texas where they both worked for Sarah Coventry jewelry and raised their three children. Raymond was an avid fisherman and was known for his amazing fish fries. He also loved to cook, hunt and play golf. Raymond was a detailed carpenter always looking for the next project. He loved to entertain and was the life of the party! Being the consummate salesman, Raymond returned to Okmulgee to open Floor Covering World with his son, Mark. Upon the sale of the store, Raymond entered retirement to enjoy fishing at will! Raymond always considered others before himself to the very end. He was preceded in death by his parents, wife, Phyllis Hutchinson, wife, Donna Hutchinson and great grandson, Max Carlisle. Survivors include his children, Debbie Garrette (Steve) of Tuttle, Ok, Daryl Cantrell (Brian) of Tulsa, OK, Mark Hutchinson of Okmulgee, OK. and sister, Carolyn Younce of Okmulgee, OK. Grandchildren include Courtney Wilks (Bryan) of Tulsa, Rachel Mosley (Eric) of Tulsa, Chelsea Carlisle (Michael) of Mustang, Blake Cantrell (Devon) of Dallas, TX, Hayden Von Drehle (Ben) of Tulsa, Tyler Hutchinson and Braxton Hutchinson, both of Tulsa and 10 great grandchildren. Viewing will be Wednesday, March 18, 2020 from 1:00 p.m. to 8 p.m.. A funeral service will be held at 11:00 a.m. Thursday, March 19, 2020 at the McClendon-Winters Funeral Home Chapel with Chaplain Steve Holestine officiating. Interment will follow in the Okmulgee Cemetery. Casket bearers will be Brian Cantrell, Steve Garrette, Blake Cantrell, Braxton Hutchinson, Ben Von Drehle, Bryan Wilks, Eric Mosley and Michael Carlisle. Arrangements have been entrusted to the McClendon-Winters Funeral Home of Okmulgee. Memories, condolences, photos and videos may be shared with the family on Raymond's Tribute Page of our website at www.mcclendon-winters.com

Raymond Gene Hutchinson was born on May 7, 1934 in Okmulgee Oklahoma to the late Everett Ray and Shirley Delight (Hayden) Hutchinson. Raymond passed away peacefully at home on Saturday, March 14, 2020. He was raised in Okmulgee where he attended... View Obituary & Service Information

The family of Raymond Gene Hutchinson created this Life Tributes page to make it easy to share your memories.

Raymond Gene Hutchinson was born on May 7, 1934 in Okmulgee Oklahoma...