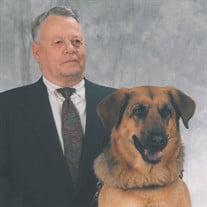 Ralph Edmond Sarber passed away Tuesday morning, August 7, 2018 at his home. He was 85 years old. Ralph was born on March 13, 1933 in Beggs, Oklahoma to the late Ralph and Nondas (Snyder) Sarber, Sr. When Ralph was a kid he threw newspapers for the Tulsa World and carried out groceries for Turner Grocery. He graduated from Okmulgee High School in 1951. After graduating, Ralph helped his parents at their family Chili and Sausage business. Ralph's chili was well known in the Okmulgee area. Ralph begin working for OSU Okmulgee in 1969 where he was the manager of the Food Warehouse until he lost the rest of this vision in 1990. He had a seeing eye dog that he got through the Lion's Club and her name was Samantha. She was Ralph's constant companion until she got too old to work. Their favorite outings were First Baptist Church and Wal-Mart. In lieu of flowers the family ask that donations be made to the Leader Dogs for the Blind, the Lions Club, and the Okmulgee Humane Society. Preceding Ralph in death are his parents and sister, Jean Ellen Ivy. Those left to cherish all the wonderful memories of Ralph is his wife of 65 years Pat Sarber, children Rebecca King of Broken Arrow, Kathy Barnett of Okmulgee and Jason Sarber of Okmulgee, grandchildren Brain King, Jennifer Melton, Bethany Meyer, and Aaron Barnett, great grandchildren Braydon, Gavin, Mason, Georgia, Bailey, Campbell, and Blake. A funeral service for Ralph will be held 10:00 a.m. Thursday, August 9, 2018 at the First Baptist Church in Okmulgee with Dr. Dennis Taylor to officiate. Interment will follow at the Okmulgee Cemetery. Friends may visit the funeral home on Wednesday, August 8 from 1:00pm until 8:00pm., with family present to receive friends from 5:00pm until 7:00pm. Arrangements have been entrusted to the McClendon-Winters Funeral Home of Okmulgee.

Ralph Edmond Sarber passed away Tuesday morning, August 7, 2018 at his home. He was 85 years old. Ralph was born on March 13, 1933 in Beggs, Oklahoma to the late Ralph and Nondas (Snyder) Sarber, Sr. When Ralph was a kid he threw newspapers... View Obituary & Service Information

The family of Ralph Edmond Sarber created this Life Tributes page to make it easy to share your memories.