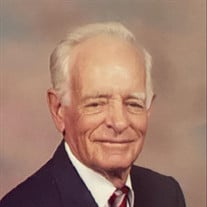 Ralph Mills, long-time Beggs resident passed away on January 11, 2022 in Bixby, Oklahoma at the age of 95. He was born in Beggs, Oklahoma to Marvel and Lona Louise (Holden) Mills. Ralph grew up in the Beggs area and graduated from Beggs, after he returned from the Army where he served in World War II. Ralph met and married Esther Rowena (Hill), the love of his life on May 23, 1948, in Beggs. Ralph attended Southeastern Oklahoma State College in Durant and later attended Southwestern Baptist Theological Seminary in Fort Worth. He and Esther moved to various towns in Oklahoma, and lived shortly in West Portsmouth, Ohio, before settling back in the Beggs area. Ralph’s life reflected the various fields that he served in: Radio Announcer, TV Weatherman and Local Late-Night Host, Preacher, Farmer, Newspaperman, Social Worker in Child Welfare, Psychiatric Social Worker for a prison, and a factory worker at a Wrangler Jeans Factory. Ralph loved farming and growing tomatoes and potatoes. His favorite potato is the Agata Yellow Potato. Ralph was preceded in death by his parents Marvel and Lona, his wife Esther, brothers Jay, Ray, James, Robert, and Carl Mills. He is survived by his two daughters Rebekah Ann Buck of Carthage, MO, Margaret Wilson of Lawton, OK, son Michael Mills of FL, brother Jesse Mills, sister Marie Rogers, grandchildren Rachel Kern, Matt Wagoner, Michael Wilson, Mark Wilson, Mindy Wilson and 7 great-grandchildren. Ralph had numerous nieces and nephews but none quite like Rick and Ronna Fryhover who were also his neighbors who helped lookout for each other. Funeral services for Ralph will be held 11:00 AM Tuesday, January 18, 2022, at First Baptist Church with Reverend David Hamilton officiating. Visitation will be 2-8 PM Monday, January 17,2022 at the McClendon-Winters Funeral Home Chapel of Beggs. Arrangements and cremation care have been entrusted to the McClendon-Winters Funeral Home of Beggs. Memories, condolences, photos and videos may be shared with the family on Ralph’s Tribute Page of our website at www.mcclendon-winters.com

Ralph Mills, long-time Beggs resident passed away on January 11, 2022 in Bixby, Oklahoma at the age of 95. He was born in Beggs, Oklahoma to Marvel and Lona Louise (Holden) Mills. Ralph grew up in the Beggs area and graduated from Beggs, after... View Obituary & Service Information

The family of Ralph Mills created this Life Tributes page to make it easy to share your memories.