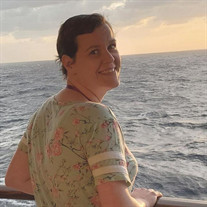 Rachel Anne Cockburn was born, along with her identical twin sister, Sarah, on May 30, 1987 at Okmulgee Memorial Hospital to Desmond Vernon (D.V.) Cockburn, Jr. and Dorothy Diane (Mitchell) Cockburn. She passed away Tuesday evening, January 5, 2021 in Okmulgee. Rachel was raised in Okmulgee and attended Okmulgee High School where she and Sarah often took each other’s tests. She graduated with the OHS Class of 2005. She then attended Midway College in Kentucky where she was involved in the Equestrian Team and later, Oklahoma State University-Okmulgee where she received her certificate in Childhood Development. For the past ten years, Rachel worked at OSU-Okmulgee in the Childhood Development Center. She loved horseback riding and being in the country, where she often found solace. Rachel enjoyed raising and showing miniature horses with her family. She was a member of the First United Methodist Church in Okmulgee. Rachel cherished her family and spent everyday with her sister, Sarah. Together they were known to adopt any homeless animal they encountered. Rachel’s greatest love was her three sons, Drake Vernon (14), Jackson Clayton (10) and Luke Cockburn (6). She is survived by her mother, Diane Cockburn, sons, Drake Cockburn, Jackson Berry and Luke Berry, twin sister, Sarah Cockburn, sisters, Rebecca Doede-Perkins, Jeri Elliot, Lisa Stites, and Susan Torbett, aunts and uncles, Michael Mitchell, Curtis Mitchell, Douglas Mitchell, Bradley Mitchell, Shirley Weich, Tommy Cockburn and Bobby Cockburn and numerous nieces, nephews, and cousins. Rachel was preceded in death by her father, D.V. Cockburn, Jr., maternal grandparents, William Mitchell and Dorothy Mitchell and paternal grandparents, Louise Cockburn and Desmond Cockburn, Sr. A Service to Celebrate Rachel’s Life will be held 1:00 P.M. Saturday, January 9, 2021 at the First United Methodist Church with Reverend Sheri Lashley officiating. Memorial contributions in Rachel’s memory may be made to the Lab Rescue OK, 2608 W. Kenosha #434, Broken Arrow, OK 74012 or the American Cancer Society. Arrangements have been entrusted to the McClendon-Winters Funeral Home of Okmulgee. Memories, condolences, photos and videos may be shared with the family on Rachel ‘s Tribute Page of our website at www.mcclendon-winters.com

The family of Rachel Anne Cockburn created this Life Tributes page to make it easy to share your memories.

Rachel Anne Cockburn was born, along with her identical twin...