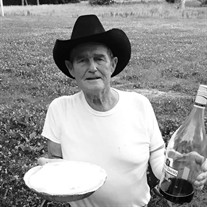 Robert Thomas “R.T” Young was born June 8, 1939 in Arkansas to the late George and Jewel (Slate) Young. He passed away Sunday, August 9, 2020 in Tulsa at 81 years of age. R.T. worked as a bridge builder and spent most of his life as a trader of just about anything. He loved to squirrel and coon hunt, fish and spend time outdoors. He also enjoyed Bar-B-Ques. He was preceded in death by his parents, a son, Rex Thomas Young and sisters, Frances McKee and Retha Fain. Survivors include his children, Wesley Young and wife Janet, Timothy Lee Young, Sherlene Gayle Young, Tommy Lee Young, and Eddie Paul Young, sisters, Thelma Franklin, Wynona Treat and Loretta Danker, a brother, Arley Young, twelve grandchildren, eighteen great grandchildren and numerous nieces and nephews. A funeral service will be held 10:00 A.M. Thursday, August 13, 2020 at the McClendon-Winters Funeral Home Chapel. Interment will be in the Mansfield Cemetery in Mansfield, Arkansas. Arrangements have been entrusted to the McClendon-Winters Funeral Home of Okmulgee. Memories, condolences, photos and videos may be shared with the family on R.T.’s Tribute Page of our website at www.mcclendon-winters.com

The family of R.T. Young created this Life Tributes page to make it easy to share your memories.