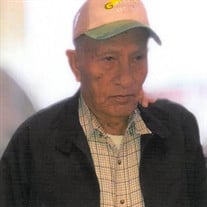 Perry Gene Booker passed away on Sunday December 20, 2020 at the age of 85. Perry was born February 19, 1935 in Hulbert, Oklahoma to the Late Homer and Hazel (Croslin) Booker. He graduated from Liberty Morris in 1953. Perry met Pat Marquardt Booker, the love of his life in 1956. They would meet and go skating every weekend. He was drafted into the United States Army in 1958. Perry would often hitchhike home to see Pat on the weekends. Perry married Patricia Ann Marquardt October 8, 1960 at the Justice of the Peace in Henryetta. He was honorably discharged in 1963. He enjoyed coon hunting with his father in law, fishing and riding his bike. Perry worked several jobs including Pepsi, Red Sewell, and Ball Brothers Glass. He worked at Ball Brothers until he retired in 1991. After the retirement he and Pat moved to Eufaula and spent their days fishing and watching their grandchildren grow up. Perry enjoyed fishing, hunting for arrowheads, and aggravating Pat or anyone else he could give a hard time. They moved back to Okmulgee in 2002 to be closer to their grandkids. He was always well known for his amazing gardens, rather it be his delicious tomatoes or large cabbages, everyone was always amazed. Perry is proceeded in death by both his parents, Homer and Hazel, his mother and father-in-law, Leo F. and Leo Marquardt, sister Genine Brown, brothers Anthony, Robert, Jackie, Doyle, and John (Dewayne) Booker, and his great granddaughter Kaydence Golightly. Perry leaves behind his loving wife Patricia Booker; a son Phil Booker and wife Ruby of Bixby; daughter Cindi Golightly and Husband Wayne of Morris; a nephew that was like a son Rick Wolfe; two grandsons Duston Golightly and wife Lindsey of Morris, Brooks Booker of Tulsa; two granddaughters Jamie Golightly and husband Wesley Steph of Okmulgee, Desiree Hall and husband Brook of Tulsa; five great grandchildren Jaiden, Jasey, Leighton, Ryan, and Abel; sisters Linda Osburn and husband Henry of Preston, Darlene Ray and husband Delbert of Preston, Joyce Cash and husband Ed of Texas, and Bernice Snelson and husband Bob of Preston; brother Paul Booker. He gained many honorary children and grandchildren over the years and had many special nieces and nephews. We will always carry your memory in our hearts. A funeral service will be held 10:00 A.M. Wednesday, December 23, 2020 at the McClendon-Winters Funeral Home Chapel. Friends may visit the funeral home Tuesday, December 22, 2020 from 1:00 P.M. to 5:00 P.M. Pallbearers will be Michael Morton, Matt Wasson, Clint Wilson, Jason Ray, Dustin Golightly, and Ronnie Orsburn. Honorary Pallbearers will be Brooks Booker, Rick Wolfe, and Wesley Steph.

Perry Gene Booker passed away on Sunday December 20, 2020 at the age of 85. Perry was born February 19, 1935 in Hulbert, Oklahoma to the Late Homer and Hazel (Croslin) Booker. He graduated from Liberty Morris in 1953. Perry met Pat Marquardt... View Obituary & Service Information

The family of Perry Gene Booker created this Life Tributes page to make it easy to share your memories.