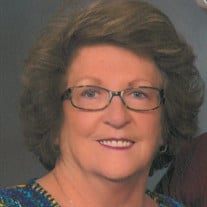 Paula Marie McCoy passed away from this life on Saturday, December 12, 2020 at the age of 73. Paula was born October 17, 1947 in Borger, Texas to Walter and Ruth (Cotton) Barrowman. Paula grew up in Holdenville. She graduated high school and attended college in Ada. Paula started her career at Hartford Insurance in Oklahoma City. Paula later met and married O.W. “Don” McCoy in 1982 and settled with their family in Beggs. While living in Beggs, they owned and operated McCoy’s Arena for nine years. Paula ran the concession at the arena and was known far and wide for her cheeseburgers and brownies. But most of all, Paula was infamous for her “HUGS”, she was a hugger. She continued her insurance career and later retired from Tedford and Associates in Jenks. Paula enjoyed many hobbies throughout the years, but her first love was her horses. She competed in team penning, enjoyed trail rides and riding for pleasure. She also loved her dogs dearly. Paula loved being outdoors fishing, sunbathing in her lounge chair, or finding her peace on her riding lawn mower. Don would tease her by saying that the grass was thinking about growing, and off she went to mow the lawn. Paula relished her time at the beach, while soaking up the sun and feeling the sand between her toes. Her favorite pastime was spending time with family. Whether it be at a cookout, a costume party, a family vacation, or getting together at Thanksgiving or Christmas, it was about gathering the family. Paula and Don later moved to Gore in 2010. Here, Paula and her sister-in-law Dorothy, aka her best friend, were well known for their daily trip to Sonic for what became known as the “Diet Coke trip”. Paula made it a priority to take care of others but more importantly she took care of Don. Paula is preceded in death by her parents Walter and Ruth Barrowman, a son Gary Lynn McCoy, sisters Mary Russell and JoAnn McGhee, brother Eddie Barrowman, brothers-in-law Paul Donald “Punky” McGhee and Sam “Alec” McCoy, sisters-in-law Christine Miska and Alice Scoggins. Paula is survived by her husband Don of the home, daughter Liz Beesley and husband David of Beggs, son Jimmy Don McCoy and wife Belinda of the home, brothers Jerry Barrowman and wife Carolyn of Oklahoma City, Larry Barrowman and sister-in-law Barbara Barrowman of Oklahoma City, and sister Linda Barrowman of Kingfisher, sister in law, and best friend Dorothy McMahan, in-laws Gladys Winsel, Lois and Rabbit Hart, Ray McCoy, Larry and Polly McCoy, grandchildren Ashlyn and Hannah Beesley of Beggs, Jerry Don McCoy and wife Jamie of Atoka, Naaman McCoy of Holdenville, Jimmy Don McCoy, Jr. and wife Shannon of El Reno, Bobby Don McCoy of Soper, John Ellis and wife Rosa of El Reno, Dessiree Viefhaus of Durant, Rob McCoy and wife MaRyssa of Atoka, and Tyler McCoy of Shawnee and a host of nieces and nephews, great-great grandkids and family and friends. Casket bearers will be Ashlyn Beesley, Hannah Beesley, David Beesley, Jerry Don McCoy, Phillip McCoy, Adam Lageveen, Jason McWaters, Rodney Demery, and Claude Brigance. Graveside services will be held at the Cherokee-McCoy Cemetery in Cookson, Oklahoma on Friday, December 18th at 11:00 AM with Pastor Steve Lamberson officiating. Visitation will be at the McClendon-Winters Funeral Home of Beggs on Wednesday, December 16 from 5 P.M. to 8 P.M. and Thursday, December 17 from 9 A.M. to 6 P.M. At the request of the family, a mask is mandatory if attending the visitation or graveside service. Arrangements have been entrusted to the McClendon-Winters Funeral Home of Beggs.

Paula Marie McCoy passed away from this life on Saturday, December 12, 2020 at the age of 73. Paula was born October 17, 1947 in Borger, Texas to Walter and Ruth (Cotton) Barrowman. Paula grew up in Holdenville. She graduated high school and... View Obituary & Service Information

The family of Paula Marie McCoy created this Life Tributes page to make it easy to share your memories.

Paula Marie McCoy passed away from this life on Saturday, December...