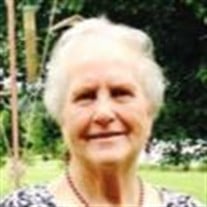 Norma Jean Whitlow, “Jeanie” passed away Wednesday, September 30, 2020 at her residence. She was 87 years of age. Jeanie was born January 11, 1933 in Putnam, OK to Harvey S. and Audra Mary (Wright) Bynum. She graduated from New Castle High School. Jeanie then joined a company that traveled all across the United States selling magazine subscriptions. She later moved back to her hometown where she rekindled a relationship and later married Richard on July 12, 1952 in Oklahoma City. In 1963, she and Richard made their home in Okmulgee, where Jeanie had a home daycare for over 30 years, touching the lives of numerous children. Jeanie was very active in her children’s activities. She was a Cub Scout and Girl Scout leader. She was a member of Southside Church of Christ and very active in planning events. Jeanie was a member of the Extension Homemaker Club (HCE), where she served as President at one time. Her membership also extended to the local Dripping Springs (HCE) Club. Jeanie was a blue ribbon winner in many areas. She was known for being an avid quilter and seamstress. She enjoyed canning, freezing, and baking. She made a pecan pie for the auction at Nuyaka Fire Department’s fundraiser one year that brought in $175.00. Jeanie was preceded in death by her parents Harvey and Audra, brother, Harvey S. Bynum, Jr., sister, Laverne Faulkner, brother Jack Bynum. Survivors include her husband, Richard Whitlow, children Richard M. Whitlow and wife Francie of Boswell, Ok, Susie Smith of the home, Teresa Minson and husband Jim of Grant, OK, Kristy French, Jeanee Almond and husband Curtis of Austin, TX, sisters Shirley Tye and husband Jim of Burneyville, TX, Kay Bynum of Maricopa, AZ, fourteen grandchildren, twenty-two great-grandchildren and one great-great grandchild. A funeral service will be held at 1:00 P.M. Monday, October 5, 2020 at the McClendon-Winters Funeral Home of Okmulgee. Interment will follow in Pilgrims Rest Cemetery in Newalla, OK. Visitation will be Sunday, October 4, 2020 from 1:00 P.M. to 7:00 P.M.. Family will receive friends from 3:00 – 7:00 P.M.

The family of Norma Jean Whitlow created this Life Tributes page to make it easy to share your memories.