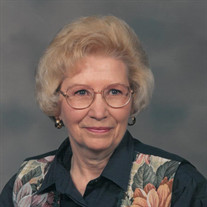 Nettie A. Kirk Carr was born at home on a farm in Montague County, Texas, to Mackey and Estley Jackson Kirk. She was the youngest of 8 children, five sisters, Minnie, Maggie, Annie, Juanita, Edith, and two brothers, J.C. and David. She was welcomed home to heaven on November 23, 2020. Her memory is carried on by her daughter, Donna Dooly and her husband James, grandchildren, Erin Dooly and his wife Michelle, Trina Cheatham and her husband Justin, Jessica Taylor and her husband Brian, great-grandchildren, and many other family and friends. From an early age, Nettie performed many tasks at home on the farm including hoeing and pick-ing cotton. After graduation from high school she moved to Paducah, Texas to live with her sis-ter, Minnie, where she worked in a drug store and as a telephone operator. It was in Paducah where she met her love, Pete. Nettie and Curtis “Pete” W. Carr were married in Paducah, Texas, March 13, 1953. They stayed in Paducah a short while, then moved to Norman, OK, where their daughter, Donna, was born. After her birth they moved to Cyril in January 1954, where their son Kirk was later born in 1956. While in Cyril, they helped operate a grocery store for several years with family members, C.D. and Ellen Wise. Following that venture, they started a dairy farm with C.D. and Ellen. Nettie would start milking in the afternoons, and the men would come in to finish up after they got home from their full time jobs. While in Cyril, she was an active member of First Baptist Church and involved in community activities. After selling the dairy, which failed due to a severe drought, Pete began working for construction companies. During his career the family moved to Prague, Sallisaw, Ponca City, Midwest City, back to Sallisaw, Moore and Tulsa. After the move to Tulsa, Nettie and Pete agreed they would not continue to follow the construction jobs. After working for two different small businesses in the Tulsa area, Nettie started a custom drapery business which she ran for a number of years. They purchased a house in Tulsa, which they renovated and sold. The proceeds from that home went to purchase property where they planned to build a house. Pete's illness and death in 1989 postponed that process but Nettie still built that house a few years later. Nettie married Billy Scott in Jenks, OK, on November 8, 1991. After a few years in the home they built, Kirk along with a partner started Twin Lakes Estates in Mounds, a housing develop-ment built around a ski lake. Mother purchased a lot and built a home there where she lived a few years and then bought a second lot and built a second house. She and Bill lived there a few years before selling the second home and purchasing a property in Beggs, that included a mobile home park. They made their home on 15 acres of the land and operated the existing mobile home park on the other portion. Nettie loved mowing and caring for the land and business. In 2015, they sold the mobile home park but continued to live on their land. After Bill's death in 2016, Nettie started exhibiting issues with memory and reasoning skills. Eventually Kirk moved in with her in 2018, and lived with her until the sale of her home in 2019. She moved to a Memory Care facility at that time. This was difficult and trying time for her and the rest of the family. Her son, Kirk, passed away in August of 2019. She is the last of the Mack Kirk family and will be missed by all the nieces and nephews. Throughout all the years of moving and changes, her church family was always what provided a sense of “home.” She belonged to many churches and developed a multitude of friends through those church homes. She first belonged to First Baptist in Beggs and later, moved to Crossroads Baptist where she attended until her illness made it difficult for her to attend. The funeral will be held at 1:00 on Saturday, November 28, 2020 at the Beggs Cemetery. Visita-tion will be from 1:00-8:00 on Friday, November 27, 2020 at McClendon-Winters Funeral Home. The family will be at the Funeral Home from 6:00 to 8:00. Arrangements have been entrusted to the McClendon-Winters Funeral Home of Beggs. Memories, condolences, photos and videos may be shared with the family on Nettie's Tribute Page of our website at www.mcclendon-winters.com

Nettie A. Kirk Carr was born at home on a farm in Montague County, Texas, to Mackey and Estley Jackson Kirk. She was the youngest of 8 children, five sisters, Minnie, Maggie, Annie, Juanita, Edith, and two brothers, J.C. and David. She was welcomed... View Obituary & Service Information

The family of Nettie A. Carr created this Life Tributes page to make it easy to share your memories.

Nettie A. Kirk Carr was born at home on a farm in Montague County,...