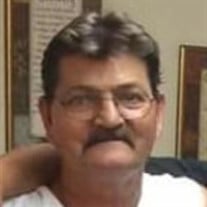 Michael Lee Smith, 58 year old resident of Beggs, passed away Saturday, July 18, 2020 at St. Francis Hospital in Tulsa. Mike was born October 25, 1961 in Tulsa to Dan and Sharon (Ward) Smith. He spent his life working as a welder. Mike never met a stranger. He enjoyed fishing, hunting and most of all gardening and planting trees. He will be remembered for being a good family man. Mike was preceded in death by two brothers, Rickey and Steven and a grandchild. Survivors include his parents, Dan and Sharon Smith of Beggs, a sister, Cathy Lynn Smith of Beggs, children, Waylon Smith of Muskogee and his child, Justin Smith of Tulsa and his four children, Daniel Smith of Muskogee and his two children, Tony Smith of Broken Arrow and his three children and Jenny Smith of Tulsa and her five children. Mike is also survived by numerous nieces. Friends may visit the funeral home on Tuesday, July 28, 2020 from 10:00 A.M. - 4:00 P.M. A funeral service will be held 2:00 P.M. Wednesday, July 29, 2020 at the First Assembly of God Church in Beggs with Reverend Robert Yandell officiating. Interment will follow in the Beggs Cemetery. Casketbearers will be Waylon Smith, Justin Smith, Daniel Smith, Tony Smith, Jacob Desmang and Kyle Smith. Hunter Townsley will serve as honorary casketbearer. Arrangements have been entrusted to the McClendon-Winters Funeral Home of Beggs. Memories, condolences, photos and videos may be shared with the family on Mike’s Tribute Page of our website at www.mcclendon-winters.com

The family of Michael Lee Smith created this Life Tributes page to make it easy to share your memories.