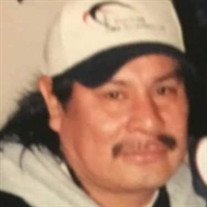 Michael Simmers, a resident of Okmulgee, passed from this life on Monday, February 17, 2020 at the age of 66. Michael was born to the late Curtis Simmers and Mary (Harjo) Simmers on November 21, 1953 in Claremore. Michael attended Haskell Indian Nations University where he was a walk on basketball player and was talented enough to become a starter. He then played basketball at Connors State University. Michael enjoyed playing the drums, golfing, and playing horseshoes. For those who knew Michael would say he was an intelligent man but above that he had a good sense of humor. He never let the things going on in this world bring him down and he wanted others to have that same sense of happiness. He was preceded in death by his late wife Frances Tucker-Simmers, both parents, brothers, Curtis "Two" Simmers, Abraham Simmers, and Tobias Simmers, and sister Jackie Simmers-Tecumseh. Those left to cherish the wonderful memories of Michael are his siblings, Edward Simmers and wife Wilma, Charles Simmers, Anna Simmers, Valerie Simmers, and Carolyn Herman-Thompson, children Olivia Poole, Stephanie Cochran, and Melissa Height, grandchildren, Taelin King, Noah Poole, Justice Nicholas, T.J. Powell, Trenton and Josten Cochran, great grandchildren, Grayson Morris, and Hayez Cochran, and a host of nieces and nephews. A viewing will be held on Thursday, February 20, 2020 from 12:00 P.M. to 5:00 PM at McClendon-Winters Funeral Home in Okmulgee. A Wake Service will be held on Friday, February 21, 2020 from 10:00 A.M. to 1:00 P.M. at Newtown Indian United Methodist Church in Okmulgee. Arrangements and cremation services have been entrusted to the McClendon-Winters Funeral Home of Okmulgee. Memories, condolences, photos and videos may be shared with the family on Michael's Tribute Page of our website at www.mcclendon-winters.com

Michael Simmers, a resident of Okmulgee, passed from this life on Monday, February 17, 2020 at the age of 66. Michael was born to the late Curtis Simmers and Mary (Harjo) Simmers on November 21, 1953 in Claremore. Michael attended Haskell Indian... View Obituary & Service Information

The family of Michael Simmers created this Life Tributes page to make it easy to share your memories.

Michael Simmers, a resident of Okmulgee, passed from this life...