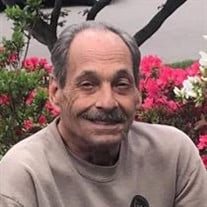 Longtime Tulsan Michael Henry Logan died in his home Thursday, following a battle with pulmonary disease. He was 72. The long-time City of Tulsa engineering inspector was born April 18, 1948, in Kansas City, Mo. The following day, Gladys (Marsden) Logan arrived at the Willows, a Catholic orphanage in Kansas City. Her birthday also was April 18, and she regarded the infant as a gift from God. She and her husband, Frances E. Logan adopted and raised Mike in Okmulgee. His college career was interrupted by a two-year stint in the Army. From July 5, 1969 until July 6, 1970, Mike was point man in a search-and-destroy squad for the Americal Division in Vietnam. He was awarded the Bronze Star and the Combat Infantry Badge. Mike returned to civilian life at Northeastern State University in Tahlequah, where he earned bachelor’s and master’s degrees. He was a member of the Freemasons, Scottish Rite and the Shriners. He loved Corvettes, fast motorcycles, swing dancing and German Shepherds. He was preceded in death by his parents and his two beloved dogs, Sasha and Shadow. Mike is survived by best friend and loving caregiver, Robbie Whiteley, Winchester; his former wife, Cathy Logan, Vancouver, B.C.; son, Adam Milam, Muskogee; daughter Kendal Hopkins, Vancouver, B.C.; and grandchildren Jason and Ava Hopkins. Services pending with McClendon-Winters, Okmulgee.

The family of Michael Henry Logan created this Life Tributes page to make it easy to share your memories.