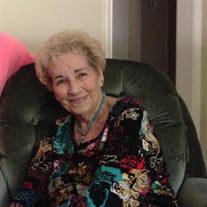 Maxine Candler MeGown was born August 15, 1924 in Spiro, Oklahoma to Escue and Zana (Emerson) Henley. She passed away on Sunday, June 7, 2020 at the age of 95. The family moved to Okmulgee, Oklahoma when she was five years old. She graduated from Okmulgee High School with the class of 1942. One week later, she married her high school sweetheart, Ted Candler. They were married for forty years when he died in 1982. In 1985 she married Calvin MeGown and moved to Punta Gorda, Florida. They moved back to Okmulgee in 2003. Calvin died that same year. She was a longtime member of the First Baptist Church, she was baptized by Dr. Watson when she was about 12 years old. She was a member of the Ball Group, The First Priority Club, and the Daffodil Garden Club. In her younger years she was a member of the Business and Professional Women’s Club, Okmulgee Roundup Club, Pony Girls and several dance clubs. She also was a hospital volunteer starting at the Old Hospital and served for a short time at Okmulgee Memorial Hospital. Maxine retired after 12 years of service from the First National Bank and Trust Company of Okmulgee. She enjoyed eating at Coleman’s where she could see old friends. She was preceded in death by her parents, both husbands, an infant daughter, a son, Doffy Candler, a grandson, Max Candler and two sisters, Nina Leu and Billadean Rogers. She is survived by a son Ted (Kathy) Candler of Tulsa, Oklahoma, grandchildren, Matt (Dana) Candler of Kansas City, Missouri, Amy Candler Pruitt of Tulsa, Oklahoma, Candee (Nick) Copeland of Boulder, Nevada, Asa (Lindsey) Candler of Chandler, Oklahoma, sister-in-law Phyllis MeGown of Okmulgee, Oklahoma, sister-in-law Pat Candler Holcomb of Jackson, Texas and her great grandchildren, Madison, Davis, Avila and Phoebe Candler of Kansas City, Missouri, Jordan Pruitt of Tulsa, Oklahoma, Kingston Walker, and Nyxcee Copeland of Boulder, Nevada and Max Candler of Chandler, Oklahoma, and daughters-in-law, Jane Candler and Theresa Candler. She is also survived by cousins, whom she enjoyed talking to about the old folks. And she loved her nieces and nephews, along with many friends here in Okmulgee and Florida. A private family committal service will be held at the Okmulgee Cemetery. A Time of Remembrance will be held Friday, June 12, 2020 at the McClendon-Winters Funeral Home from 5:00 P.M. – 8:00 P.M. Arrangements and cremation services have been entrusted to the McClendon-Winters Funeral Home of Okmulgee. Memories, condolences, photos and videos may be shared with the family on Maxine's Tribute Page of our website at www.mcclendon-winters.com

Maxine Candler MeGown was born August 15, 1924 in Spiro, Oklahoma to Escue and Zana (Emerson) Henley. She passed away on Sunday, June 7, 2020 at the age of 95. The family moved to Okmulgee, Oklahoma when she was five years old. She graduated... View Obituary & Service Information

The family of Maxine Candler MeGown created this Life Tributes page to make it easy to share your memories.