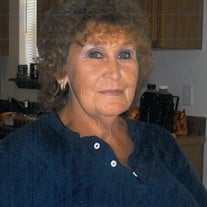 Mary Louise Wimpey (McGahan/McCall) was born in her home on March 4, 1941 in Goodman, MO. She was raised in the rolling hills of southwest Missouri, a farm girl, a tomboy, who was as tough mentally as she was physically. Mary attended a rural one room school house in Pleasant Point, MO until she was in the eighth grade, then graduated from Goodman High School. During Mary's high school years she worked at the Coffee Cup restaurant on the square in Neosho. At that time the square was the place to be. After graduation she followed her high school flame to FT Gordon, GA, to get married and have her two children Joey and then Becky. Then returned to Goodman for a few years, and then in 1963 moved to Collinsville, OK. Many good times were had in Collinsville 1975 brought a big change; a move to Tulsa as a single parent. In a few months it was then that Mary finally really met the love of her life; her real soul mate Darrel McCall, who recently preceded her in death on August 20, 2019. What a reunion that must have been!!! They were inseparable from the time they married until Darrel's passing. Mary had many jobs that required manual labor tasks, in the 70's she riveted hardback suit case, and most of her life she depended on waitressing for financial support, which she was very good at and made lots of tips, managed a bar one time and it made the most money during her rain than any other time. She even sand blasted big Simi-trucks before they were painted....she began her career at Bama Pie in the late 70's and became a lead Forman of the frozen line. Her hands were never warm again. Interesting fact, Mary helped create the recipe and introduction of the biscuit you eat at McDonalds today...as well as those miniature Bama Pies. Bama Pie could never make a pecan pie like Mary could, hers are world famous and many have fought over who would get the last piece! Mary spent many found hours with her soul mate Darrel, they fished and fished and fished, they caught'em and cleaned'em, Mary cooked'em and all the family and friends ate'em! Crappie... Boy, were they extraordinary! Mary was a very fine cook but had no recipes such to speak of....she just cooked with her heart and it was always great!!!! She used pinch of this, a smidge of that, a handful of those and just enough for everything else. During her later years she worked at campgrounds as the gate keeper with Darrel at Ft. Gibson Lake, lived at the park, worked at the park and enjoyed spending time together each and every minute of it. This allowed them to do what they loved, fishing and water skiing. Mary was extremely proud of being able to solemn water ski. It took a while dragging her around Eufaula lake but Darrel and Becky managed to get Mary up-right and gliding across the water like a pro. Mary was pretty good as water skiing but getting back in the boat was the fun part....for those observing!!! Mary was preceded in death by her father and mother,PE and Almeda Wimpey, two baby siblings and recently her brother Earl Wimpey and her grandma, our Grandma Buzz passed away in 1986, we are sure that was a huge reunion as well. Mary leaves behind two sisters Kathy Matteo of Eldon, MO and Deby Hilwig of Oplis, KS daughter Becky McGahan of Beggs, OK and son Joe McGahan of Broken Arrow, four grandchildren Robin Boak of Beggs, Jason Carter of Springfield, MO, Mary Johnson of Broken Arrow, and Matt McGahan of Broken Arrow, eight great-grandchildren Caleb, Austin, Krissi, Rae, Gage, Liah, Kolby and Ben and one great-great grandchildren Arian along with several nieces and nephews. Now take the shared experiences and wisdom from Mary; who was never short on advice rather you wanted it or not... and make the best YOU that you can make.. A Time of Remembrance for Mary will be held Saturday, January 18, 2020 from 1:00pm-3:00pm at the McClendon-Winters Funeral Home Chapel of Beggs.

Mary Louise Wimpey (McGahan/McCall) was born in her home on March 4, 1941 in Goodman, MO. She was raised in the rolling hills of southwest Missouri, a farm girl, a tomboy, who was as tough mentally as she was physically. Mary attended a rural... View Obituary & Service Information

The family of Mary Louise Wimpey/ McGahan, McCall created this Life Tributes page to make it easy to share your memories.

Mary Louise Wimpey (McGahan/McCall) was born in her home on March...