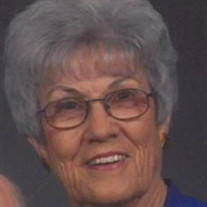 Mary Odelene Ross, 97, of Boynton Oklahoma went to be with the Lord on October 17, 2021. Mary was born on July 4th, 1924, at their family home near Tuskegee, Oklahoma to Sarah Elizabeth Hagee Johnston and Odis Walter Johnston, better known as “Sweet Potato Johnston.” Mary was the fifth of eight children. Her family was a hardworking, independent, self-reliant, Christian family. Their faith in Christ and love for each other kept them close throughout their lives. Mary graduated from Slick High School at the age of 15 in 1940. After graduation, she attended a junior college in Bristow. She passed the state test and went to work as a teacher at Newby, Oklahoma on a war certificate at the age of 18. Mary taught the next few years at Newby, Banner, Tuskegee, and Slick High School. She attended summer school to continue her education. While teaching, she met (as she stated), the “man of her dreams,” Eugene H Ross. Gene, as he was known, had been in the Navy and was attending OSU, studying agriculture. She took a year off from teaching to attend OSU, and both she & Gene took jobs the next year teaching. They were married on October 9, 1948; Mary graduated from East Central State College in August of 1951 with a Bachelor of Science in Education. After their marriage, Mary taught at Mason, Okfuskee, Tuskegee, Boynton, Glenpool and then retired from Haskell Public Schools. After their retirement, Mary and Gene traveled extensively throughout the United States and twice to Alaska. She loved taking her grandchildren with them when they could. Mary was faithful to church, serving as church pianist and Sunday School teacher for many years. She had been a member of various Assemblies of God churches during her years and currently attended Haskell Assembly of God. Mary and Gene ministered at Springs Retirement Center in Muskogee for over 24 years together, conducting a weekly service to brighten the patient’s lives through singing, teaching God’s word and delivering special gifts during holidays. Mary continued the ministry by herself for 12 years after Gene’s death. When Covid restricted her from entering the nursing home, she continued to serve others by visiting those who were homebound in her community. Mary delivered food, prayed with them, and encouraged them. She continued this ministry until two weeks before she passed. She was a great cook and enjoyed feeding others. She passionately loved the Lord, her family, and showing Christ’s love to others. She is survived by one sister, Sarah Darlene Goins and husband, Tom of Broken Arrow. Brother-in-law, Authur Watson, of Eufaula. Marilyn Herriman, daughter, and her husband, Allen, of Boynton and Jerold Don Ross, son and his wife, Lesa, of Boynton. Four grandchildren: Malia Dismang and husband Chad, Melinda Foutch and husband, Blake, Donovan, and Dustin Ross. Four Great-grandchildren: Rowdy Webb, Colt Webb, Wyatt Foutch and Bristol Foutch, as well as many beloved nieces and nephews. In lieu of flowers, you may make donations to Haskell First Assembly of God Missions. Donations may be sent to: Haskell Assembly of God, PO Box 1260, Haskell, Oklahoma 74436. Please designate the Mary Ross memorial fund. A celebration of life will be held 2:00pm, Friday at First Assembly of God in Haskell with Pastor Donald Hogue officiating. Friends may visit the funeral home Thursday from 1:00pm – 7:00pm with family present from 5:00pm – 7:00pm. Arrangements have been entrusted to the McClendon-Winters Funeral Home of Okmulgee.

Mary Odelene Ross, 97, of Boynton Oklahoma went to be with the Lord on October 17, 2021. Mary was born on July 4th, 1924, at their family home near Tuskegee, Oklahoma to Sarah Elizabeth Hagee Johnston and Odis Walter Johnston, better known as... View Obituary & Service Information

The family of Mary Odelene Ross created this Life Tributes page to make it easy to share your memories.

Mary Odelene Ross, 97, of Boynton Oklahoma went to be with the...