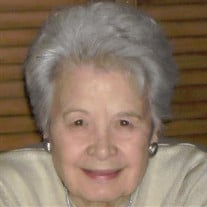 Miller, Martha Patricia "Pat" Burgess passed away January 13, 2018 surrounded by her loving family. Pat was born October 6, 1925 in the family home in Claremore, OK to William Earl and Martha Pasco Hartley Burgess. Patty B's father worked for the Lock Joint Pipe Company. His job took them all over the east coast. She started school in Westbrook, Maine and graduated from Central High School in Detroit, Michigan fourteen schools later. She worked as a WWII drill press operator with her mother the summer after graduating from high school. In September she enrolled in Oklahoma A&M College (now OSU) studying Home Economics with an emphasis on dietetics. She pledged Kappa Delta Sorority and made many wonderful lifelong friends and was honored as a Fifty Year Member. After graduation from Oklahoma A&M College she completed a dietetic internship at Henry Ford Hospital in Detroit, Michigan. After successfully completing the internship she worked at Hillcrest Hospital in Tulsa, OK and then at the VA Medical Center in Muskogee, OK where she met the love of her life Raymond Miller. They married and moved to Okmulgee, OK where Ray opened a private medical practice. They were blessed with two daughters. Pat was involved in many activities at the First United Methodist Church in Okmulgee including United Methodist Women, Food Pantry, Sunday School Teacher, and was Chairman of the Board of Trustees. She especially enjoyed a mission project for the church where new cushions were needle pointed for the Chancel rail. She was a member of the Daughters of the American Revolution as well as The National Society of Colonial Dames of America and was extremely proud that she was able to trace her ancestors to the pre-Revolutionary War time period. Other interest included sewing, reading, crossword puzzles, bridge, Girl Scout Leader, P.E.O. Chapter Z of which she was honored as a Golden Girl, Art and Lit and Sesame Clubs. She believed in lifelong learning which was evidenced by her taking a class to learn how to use the computer. She enjoyed being a grandmother (Meme) to Eddie and Ray and spent as much time as she could with them. She especially enjoyed having them visit her in Okmulgee and spending time with the family in Estes Park, CO. and at Lake Tenkiller. Pat was preceded in death by her parents. She is survived by her husband Ray of 65 years, daughters Martha (Dan) Blevins of Tulsa, OK and Beth (Ed) Martin of Midwest City, OK and grandsons, Eddie Martin of New York City, NY and Ray Martin of Midwest City, OK. Friends may visit the funeral home from 12:00 P.M. to 8:00 P.M. on Thursday, January 18, 2018 and the family will be present from 4:00 P.M. to 6:00 P.M. to greet guests. Services will be held at the First United Methodist Church, Okmulgee Ok at 11:00 A.M. Friday, January 19. Memorial Donations may be made to the First United Methodist Church, 302 South Seminole, Okmulgee, OK., 74447. The family would like to express heartfelt thanks to her caregivers. Arrangements have been entrusted to the McClendon-Winters Funeral Home of Okmulgee.

The family of Martha "Pat" Patricia Miller created this Life Tributes page to make it easy to share your memories.